Awesome author Phil Earle's new book HEROIC comes out today, and I'm just a little bit thrilled to be presenting this guest post from him about the cover of the novel! 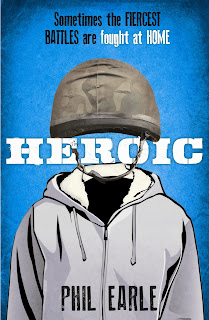 I’ve learnt that I should have absolutely nothing to do with the covers for my books. As a ridiculous control freak, it’s been a difficult lesson to learn, but finally, three books in, I’ve accepted it.

And my covers are better for it.

Every author daydreams about how their precious story will finally look on the shelf, the number of finishes it’ll have, the amount of foil or embossing that will make it pop and leap off the bookshop table and into the arms of an adoring reader.

I spent far too much time thinking about it, at the expense of writing whatever came next. I knew exactly how the jacket should look in my head, but it had become such a fantasy or an ideal, that I was buggered if I could describe it properly to any of the good folk at Puffin.

I tried though, through a series of waffly emails that probably had them tutting and scratching their heads, until they kindly came up with this concept. 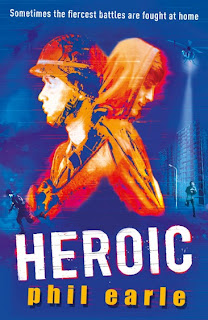 I really liked it.

It felt more dynamic than Billy or Daisy, had intrigue and movement that might attract new readers looking for something faster-paced.

Job done. Or so I thought.

However, the cover didn’t go down well with retailers.

And that’s the thing you see, it’s not just about the author and publisher back-slapping each other over another glorious cover. The bookshops have to love it too, because if they don’t, they don’t put it in their shops.

And if they don’t put it in their shops?

Enough already…you get the drift.

So we were stuck, as our cover’s reception was lukewarm at best, which sent me into a head-spin.

I had no idea how else it could possibly look, or how it could do the content justice if it was different.

But obviously, clearly, I was wrong and this is where my lesson was learnt.

Authors, generally, don’t know what’s best for their covers. They can advise and prompt and be generally irritating to their publishers, plus, every author should have a cover they can be proud of. But they should NEVER design them, or try to be involved as much as I was, as I had no objectivity whatsoever.

When the final, magnificent cover for HEROIC dropped into my inbox, I had no idea whatsoever what was on it. There was a moment, as the jpeg threatened to open, that the fear nibbled at me, but that was soon replaced and forgotten. What we ended up with, to me, looks iconic and intriguing, without appealing solely to any gender or particular age.

I hope it’s universal in its appeal, but know for sure, that it’s better than the words that follow inside. And for that, I am very grateful indeed…


And I'm very grateful to you,. Phil, for such a fascinating look into part of the book publishing process that I've never really thought of before! I like both covers, but think the final one is definitely better and am sure it will draw lots of readers in. I hope HEROIC is hugely successful.