Thursday Thoughts: Review of The Elephant of Surprise by Brent Hartinger 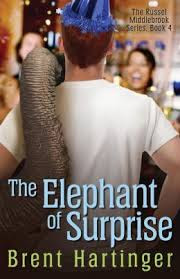 (An e-ARC of this book was provided to me by the author in exchange for a fair and honest review.)

Warning: Spoilers below for the first three books in the Russel Middlebrook series.

After a discussion about the Elephant of Surprise, 17-year-old Russel and his friends Min and Gunnar experience some extremely unsettling times in their lives. Fresh from realising that his relationship with long-distance boyfriend Otto has run its course, Russel meets Wade - a hot guy who's a freegan, living in a community with others who forage for food and occupy a vacant house. Meanwhile, Min is having doubts about her relationship with her girlfriend Leah, while Gunnar is becoming obsessed with documenting his life.

This was the first book by Brent Hartinger that I've read - I didn't realise when I agreed to review it that it was a series book - so a fairly detailed recap of the events of the first three books in the series before the novel actually started was most welcome, catching me up nicely on who everyone was and what had happened before.

Once the novel started, I was quickly engaged by Russel's voice - full of character and quirky enough to be entertaining without pushing too far into annoying territory. Min and Gunnar are also good characters, while Wade and the rest of the freegans are really well-portrayed, with Hartinger looking closely and the movement and exploring its positives and negatives. In addition, Hartinger's writing style is easy to read, and the book is a quick read - due both to its relatively short length, and a fast moving plot which makes it difficult to put down.

One minor gripe is that Kevin, Russel's ex, seems a bit one-dimensional - particularly in comparison to the other well-rounded characters - and the subplot with him was a bit predictable for me, personally. Still, there's an awful lot to like about this book, and it's great to see a novel about gay teens which doesn't feel like an 'issue' book. I'm certainly planning on checking out the three previous novels in the sequence (and will be intrigued to see how the film version of book 1, The Geography Club, turns out!)