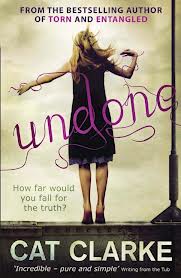 Jem has always been madly in love with the boy next door. Unfortunately, while Kai is her best friend, she’s not the girl for him. In fact, there is no girl for him – Kai is gay. Jem is one of the only people who knows this, though, until he’s cruelly outed online by someone anonymous. When Kai can’t live with people's reaction to his outing, and kills himself, Jem resolves to find out who was responsible, and bring them down.
Jem is a really interesting narrator - not particularly likeable (Clarke doesn't really do likeable narrators!) but deftly portrayed. Her reaction to Kai's tragic death is completely believable and even as her plans get more and more out of control they always feel rooted in reality - it could easily have become melodramatic in the hands of another author, but never does here. There’s a good supporting cast – it’s hard to say too much about them without going into spoiler territory, so I’ll avoid any details, but all of the other characters are well-drawn, with Clarke avoiding ever making Team Popular as sterotypical as Jem thinks they are.
Dealing with cyberbullying, homophobia, and suicide, it’s no surprise that this is a powerful novel, but Clarke uses enough humour to make sure that it’s never relentlessly bleak. Her writing style, always one of her strongest points as an author, is as good as ever, and this is definitely hard to put down.
A mild criticism is I found most of the book to be a little predictable, until the stunning last few pages. (That said, I said something similar about Entangled, and I don’t recall that being a criticism that many other people made, so perhaps it’s just me!)
Overall, I didn't think this was quite as brilliant as Torn, which I absolutely loved, but it's still a very good read which is a definite recommendation for fans of gritty contemporary stories.