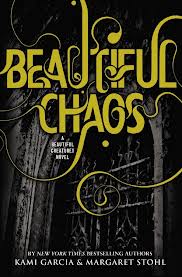 As always with sequels, spoilers – in this case fairly major – for Beautiful Creatures by Kami Garcia and Margaret Stohl and Beautiful Creatures: Beautiful Darkness by Kami Garcia and Margaret Stohl; read with care.
Those of you who've been hooked on this series already will remember where we left off. A choice was made. Everything seems to have been changed. And now, we find, the End of Days is near… Dark characters lurk. Some who we thought (or hoped) were gone, have returned. Other things we’ve not seen before are starting to tear the small town of Gatlin apart. The shorthand way of summing up how terrible things are is to note that Mrs Lincoln may be one of the good guys now…
Can Ethan, Lena, the ever faithful Link (now with super-powers, sort of, at least) and Liv – no longer a Keeper in training after getting involved last time around – save the world? Given the blurb for this one specifically states This time there won’t be a happy ending, it’s a tougher question than it usually is when you’re reading this kind of book.
Of course, the previous sentence suggests that this is a book which fits into a particular kind. Really, that’s doing it a disservice. Yes, it's paranormal romance – but it's also a thrilling adventure, a wonderful Southern Gothic, and, above all, a story about people. The characterization is simply marvelous. In a sense, it always has been – but Stohl and Garcia, already on a level far above most writers today, seem to have really upped their game here and developed some of the lesser characters to the same level as the main trio.
To give too many details here would firstly risk spoiling things, and secondly, be rather pointless anyway. This is pretty much review-proof – if you've read the first two, you're surely not going to stop at this point, and if you haven't, you need to start with them rather than this. Let's just say that the first 400 pages or so completely lived up to the Everest-sized expectations I had for this one, and the closing chapters somehow managed to get better and better. By the end, it's brilliant, fabulous, and above all absolutely heart-breaking.
A special note on the world-building here – most authors would feel pleased if they created one compelling world. The pairing of Garcia and Stohl has come up with two; the paranormal one of Casters, Incubuses, Vexes and so on, which is fabulously fleshed out – but also the normal Southern town of Gatlin, one of the most memorable settings I've read for ages. In addition, they're a pair of fantastically literary authors, with references to other works abounding - here, the most notable (apart from To Kill A Mockingbird by Harper Lee, which has been a constant presence in the series), are The Crucible and Of Mice and Men, which both feature and are somewhat mirrored in the plot.
Anyway, I've rambled on enough, and as I said, I'll avoid giving too many details. One warning, though - stock up on tissues. You'll need them! If it isn't obvious, massive, massive recommendation.
- February 03, 2013