Friday Feature: Guest Post by Milda Harris on 5 Fun YA Mysteries To Read

After going a bit longer than I wanted to without too much author stuff on either blog, I've got some really cool stuff lined up over the next few weeks. To kick things back off, I'm really pleased to present a great guest post from author Milda Harris! 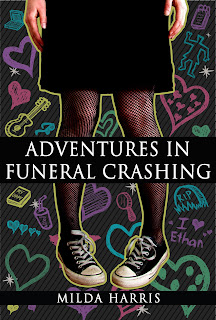 5 Fun YA Mysteries To Read


By Milda Harris
I’m currently working on the third book in my Funeral Crashing Series. I know that Funeral Crashing doesn’t sound like a series of YA mysteries, but that’s what they are – the main character Kait Lenox crashes funerals, crushes on the hottest guy in school, and solves mysteries. They’re fun reads! Anyway, whenever I write mysteries, I find that I also like to read them. A good mystery outside of my book, helps put me in the frame of mind to write an equally excellent mystery, myself.


On that note, here are five fun YA mystery books to read. They’re ones I’ve read AND ones I’m dying to read:

1.      The Unbecoming of Mara Dyer by Michelle Hodkin: I am so excited to read this book. It’s on my list of must reads. The general premise is: Mara Dyer survives an accident where all her friends are killed. She wakes up in the hospital and doesn’t remember how she got there and it goes from there as she tries to piece it all together… Sounds VERY creepy and suspenseful!  I love the “what really happened?” kind of mysteries.

2.      The Westing Game by Ellen Raskin: This book is an old favorite of mine. I haven’t read it in ages, but I still think it’s a great YA mystery and it did win the Newberry Medal, wow, in 1979! I read it well after that, so hopefully it still holds up in 2013. It’s about a man named Sam Westing who in his will tells his sixteen heirs to figure out what happened to him. Ooo, and there’s a movie…made in 1997 for TV! I need to find it. I’d like to see how they adapted it. I really thought it was an excellent mystery!

3.      Ruby in the Smoke by Phillip Pullman: I’m in the middle of this book right now. It was recommended by a friend who knew I enjoyed The Golden Compass, which Phillip Pullman also wrote. Set in Victorian London, it follows 16-year-old Sally Lockheart who looks for clues in her father’s mysterious death after she receives a strange letter in the mail from an unknown sender. It sounds intriguing so far and I have a thing for creepy Victorian backdrops. They are perfect for mysteries! Ooo, as a note I see that this book was also made into a movie, specifically, a BBC TV movie a few years ago. Fun!

4.      The Babysitter by RL Stine: This is another older book, first published in 1989. Still, it made RL Stine a prominent author for children’s horror (before Fear Street and Goosebumps) and it spawned three more sequels. Like the title says, it’s about a babysitter…who is terrorized while babysitting. She has to figure out who’s after her before it’s too late. I actually really want to reread it and see if RL Stine still terrifies me with his books like he used to!
5.      Ten by Gretchen McNeil: This is the next book on my list to read and it sounds intense: There is an exclusive house party on an island. This sounds fun until the terror begins and they get picked off one by one. I get chills just thinking about reading it! Plus, the reviews are really good! I can’t wait to get creeped out and start guessing who’s behind it all as the characters get killed off one at a time. You have to be really good at mysteries to pull this kind of mystery off!

Okay, now I’m inspired! That’s good because I have to go back to writing Funeral Crashing #3  tentatively titled Adventures of a Funeral Chaser due out in Spring 2013. The title could still change, though. I mean, I’m still writing it and maybe I’ve guessed the wrong person as the murderer and it won’t turn out to be who I thought it was! Hey, it happens. That’s the best part of mysteries – the guessing!

Author Milda Harris is a Chicago girl who ran off to Hollywood to pursue a screenwriting dream! She has a dog named after a piece of candy (Licorice), was once hit by a tree (seriously), and wears hot pink sunglasses (why not?). Between working in production on television shows like Austin & Ally, Hannah Montana, and That's So Ravenand playing with her super cute dog Licorice, she writes young adult murder mystery, horror, paranormal romance, and chick lit novels.You can find her on Twitter, Facebook, Goodreads and her website.
- February 08, 2013