As those of you following me on Twitter will know, one of my favourite YA contemporary books of the last few months has been the funny, touching, and altogether wonderful Geek Girl by Holly Smale. I was thrilled to get the chance to talk to Holly!

1.. When you close your eyes and imagine your readers, who do you see?


Holly Smale: I picture my sister, actually. We're very close and have an almost identical sense of humour, so it helps me relax: instead of worrying about making everyone in the world laugh, I focus on what will entertain the two of us. I honestly think it can be dangerous if you try to aim writing too closely at a particular demographic: average readers don't really exist. Write what feels right and hopefully the perfect readers will find you.

2. The scenes which deal directly with the modelling world seem very realistic - no surprise given your own experience as a model. Were any of the events in the book based on things that happened to you, or people you knew?
HS: Quite a few of them are based on real life, or are a fictionalized or relocated account of something that really happened. I was a very clumsy model, and I was frequently getting into scrapes similar (or identical) to the ones that Harriet goes through. Many of the scenes - where she gets spotted, when she's in the agency - are almost precisely what happened to me. Sadly a lot of the bullying scenes are too. I think you're lucky if you get through school without at least seeing some pretty unpleasant behaviour, and I was no exception.

3. I really liked the relationship between Harriet and her stepmother Annabel. Who are your favourite parents or step-parents in teen books?
HS: Stepmothers frequently get such a bad rap in literature. Cinderella, Snow White, Hansel and Gretel: you name it, they're all hideous. I thought it was really important to show that it's not always the case, and that the relationship can be just as strong as a blood tie. It's a choice to love, and that's really powerful.
My favourite fictional dad is, hands down, Atticus Finch from To Kill A Mockingbird: he's so wise and calm and gentle. I also love Samuel Hamilton in East of Eden for similar reasons (not technically a teen book, but I'm slipping it in there). I have a real soft spot for Adrian Mole's parents, George and Pauline, too: they're hysterical. I'm fond of parents that don't behave like 'parents: it's a misconception that people become perfect as soon as they have kids, and fiction should sometimes reflect that.
I love Atticus - definitely one of my favourite fictional characters of all-time!

4. What are you most looking forward to about being a published author?
HS: That's easy: talking to children who really love the book. One eleven year old wrote to me recently to say that she found the confidence to make friends and stand up to her bullies because of Geek Girl, and I cried for about an hour. It really does make the hard, sloggy parts of writing worth it.

5. Is there anything you're not looking forward to about being a published author?
HS: I genuinely love every single one of my characters: they feel very real to me, and a little bit like my children, so I find it hard when they're criticised. That's all part of the writing process though: you create fiction, and you have to allow people to respond to it exactly as they want to. It just requires a deep breath and a step back, sometimes. After all, nobody loves everybody in real life either.

6. Being a model is Harriet's friend Nat's dream, rather than Harriet's. When you were younger, did you dream about being a model, an author, or something else entirely?
HS: When I was very, very young - three or four years old - I was a bit confused, career-wise: I wanted to be a ballerina who worked as an astronomer and paleontologist at night and flew planes at weekends. Then I realised where books came from, and that was it for me: I wanted to be an author. I never wanted to be a model; I hate having my photo taken, and physically burnt quite a few of my modelling photographs because I thought they were hideous. I regret that now. It was a once-in-a-lifetime experience, but I didn't fully appreciate it at the time. We never do at that age

7. Do you listen to music when you write? If so, what was the soundtrack for Geek Girl?
HS: I think sessions for Geek Girl were divided between my favourite instrumental or electro music - Ludovico Einaudi, The Glitch Mob, Explosions in the Sky, Yann Tiersen - and more vocal-based albums: I remember listening to an awful lot of The XX, Florence and the Machine and Bombay Bicycle Club.
Several I haven't heard of there, will have to check them out! I love Florence and the Machine.

8. As I mentioned when reviewing Geek Girl, it's a book which brought me out of a real reading slump due to great characters and Harriet's wonderful voice. Do you ever get in a reading slump yourself, and if so, what do you do to get out of it?
HS: That's so lovely to hear, thank you! Yes, I fall into really big reading slumps: especially because when I'm writing a lot I often struggle to switch on to somebody else's style or voice and turn my own off. It can be very frustrating, and I'll start and abandon maybe eight or nine books in a row before I can settle into one. Often the only thing that helps is re-reading a favourite from my childhood as a kind of literary comfort-blanket, and that will soothe my brain until I'm ready to move on to something new.
Great point - I used to do that a lot, but haven't reread much recently - will definitely give it a try next time I'm in a slump.

9. Rumour has it we can expect to see more of Harriet in the future (which is fabulous news, obviously!), but would you consider writing in another genre as well as contemporary?
HS: Hopefully I've still got a lot of writing years left in me, so I would definitely like to think I'll experiment and do something new. In honesty, I do really love contemporary - I think it's exciting - and I'm more likely to shake it up a bit by writing an adult novel. Saying that, the story tends to choose the author rather than the other way round, so who knows? As long as I'm excited by an idea, I'll be happy writing it.

10. What's next for Holly Smale?
HS: I've got some more Geek Girl books to write, and I'll be travelling abroad to research them (definitely one of the perks of writing). I'd like to finally get my own place and maybe a kitten - so that I can wear black and stroke it like a Bond villain, mainly - but that's impossible at the moment: I'm just too busy, and it wouldn't be fair. Oh, and I really need to learn how to cook. At the moment, I survive on sandwiches and pot noodles: I'm surprised I haven't fallen apart from some kind of vitamin deficiency.

Can't wait for future Geek Girl books! Best wishes for the future, Holly, and thanks for taking the time to chat to me.

This is part of the Geek Girl blog tour - see below for other blogs you can catch Holly on! 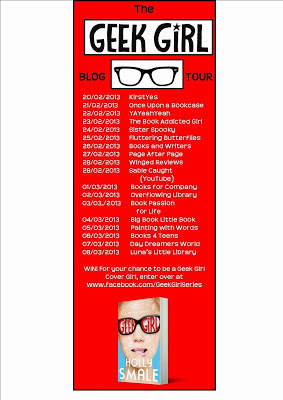