Sunday Spotlight: Tomorrow When The War Began by John Marsden 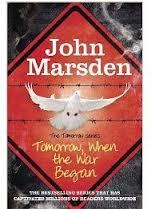 Ellie and her friends are going to Hell. On a camping trip, that is. Taking enough supplies to last a week, the Australian teens are determined to have fun in the remotest part of the bush and get to know each other a little better. Or a lot better in certain cases… The week goes well, but all too soon it’s time to leave. Except when they get back, it’s to find their worlds have been turned completely upside down. Their farms are devastated, animals dead or dying, and families nowhere to be found. How can this have happened, and is it related to the mysterious planes they saw flying overhead on Commemoration Day? The teens set out to find out what happened to their families and work out just how they can survive.

Okay, I feel rather ashamed that I’ve never picked this up before considering it was originally published in 1993. In my defense, I’ve only recently started to read much dystopia and while this is set in our world rather than the future, it’s still definitely in that genre. The invading forces are a terrifying enemy – made more unsettling, if anything, by Marsden’s refusal to identify exactly which army it is that’s invaded. The teens are resourceful and plucky heroes who are forced to do some awful things themselves in order to survive, and the character development – especially of Ellie and of her friend Homer, classroom joker turned crafty plotter, is outstanding. I also thought the romance involved here was superb – never feeling tacked on, instead the intensity of several characters’ feelings for each other seemed a very natural response to just how close death could be to the group of teens. It’s also not afraid to make you ask yourself some hard-hitting questions – just how much is fair in love and war? Some of Ellie’s actions seem to scare even her; can they be justified if they could help her get her family back?

There’s seven books in this series plus another connected series as well and if they maintain anywhere near this level of quality that’s my reading for several months sorted out! Very high recommendation.
- January 06, 2013