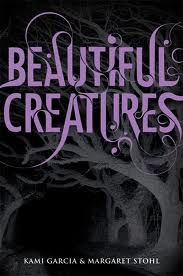 This is the first book in one of my very favourite series of recent years (although I somehow haven't read book 4 yet!), and I can't wait for the upcoming movie. I was really surprised to find that I'd never posted my review for it here, but I'm guessing that was because I read it before I started blogging... am correcting that oversight now!


Teenage boy meets mysterious new stranger in a small town. They fall in love, he finds out she's harbouring a dark secret, the pair of them try to find out if their relationship can work while she tries to keep him safe from her world. This kind of book appears to be released every few weeks since Twilight became so successful – but rarely in the past few years has it been done as well as it has in Beautiful Creatures.
Ethan Wade, the narrator, is counting down the days until he gets out of Gatlin, a small town in America's South, where most of the inhabitants are still riled about losing the Civil War – or War of Northern Aggression, as they call it. His mother is dead, his father a recluse, and he's being looked after by his stern but loving housekeeper, crossword fanatic Amma.
Moving into town is the beautiful Lena Duchannes, niece of reclusive Macon Ravenwood, who lives in a manor he hasn't left for years. When she and Ethan are almost immediately drawn together, he finds they can read each other's minds, and that she is a Caster – possessing strange magic, like the rest of her family. In addition, they discover a locket which, when they touch it, gives them visions of two of their ancestors during the Civil War.
But while Ethan is counting down the days to leaving Gatlin, Lena is counting down the days to an even more important milestone – her 16th birthday, when she will be Claimed by either the Light or the Dark. As the days come nearer and nearer, it's clear that malign forces are involved, and less clear whether she will even reach that birthday.
Added to that pressure is the bigotry shown towards Lena by most of the other inhabitants of Gatlin, who dislike newcomers and have always shunned her uncle - although some are supportive, as Ethan and Lena find that there are many townsfolk with hidden depths which Ethan could never have imagined.
Many books I read at the moment seem to start slowly and pick up speed. This one starts quickly and is going at a canter by about a third of the way through. Even the bits at the start which appear to be 'just' character development turn out to be subtle foreshadowing as certain facts are revealed to the two teens. It's a multi-layered, wonderfully deep plot, with rich characters and an incredible atmosphere which gave me goose bumps while reading it. It has obvious similarities to Twilight, but it also draws on To Kill a Mockingbird – not only is it the book their English class is reading, but Macon's dog is called Boo Radley.
The characters are wonderful, particularly the main two, with Ethan being the most likeable narrator I've read for a while. Amma, Lena's mysterious cousin Ridley, and Ethan's best friend Link, who stands by him as the romance inevitably alienates him from most of the popular kids in school, are also especially well developed. The scenes the pair see when they touch the locket also deserve special mention – while they're always brief, they feel realistic for a historical fantasy setting, and Lena's ancestor Genevieve and Ethan's great-great-great-great-great-uncle, who he shares a name with, are both well-written.
In closing, this is an excellent choice for any teens with an interest in this genre, and the authors' writing style is good enough to attract those who don't normally read this type of book - it will be enjoyed by adults as well.
- January 13, 2013