I really enjoyed Dreams, book 1 in Daniela Sacerdoti's Sarah Midnight series, so was thrilled to be asked to take part in the cover reveal for book 2, Tide! 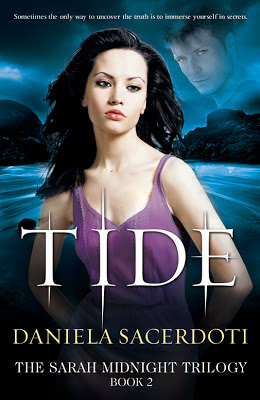 Sarah Midnight is no ordinary teenager. She is a demon hunter, caught up in one of the deadliest wars unknown to man. Orphaned at the age of sixteen, Sarah learned the family trade of hunting without her parents to guide her but under the watchful eye of her ‘cousin’, who was revealed to be Sean Hannay, no relative at all, but a dear friend of the real Harry Midnight.

Now, in the exciting sequel to Dreams, the fight continues. Sarah and Sean may have defeated the Scottish Valaya, but the rest of the war still rages on, and Sarah, Sean, Nicholas and their companions must unearth the identity and location of the Enemy – the leader of the demons – before the world plunges into the Time of Demons once more. Their quest leads them to Sarah’s family home, the Midnight mansion in Islay, and there they discover horrible truths about the demon ruler, his plans,and Sarah’s own personal history.

Along the way, Sarah must battle not only the demons but her hurt toward Sean and her feelings for the enigmatic Nicholas, who has plans of his own.

Daniela Sacerdoti is the bestselling author of Watch Over Me. She was born and raised in Italy but has lived in Scotland for the past ten years. Daniela holds a degree in Classics from the University of Turin and has taught Italian, Latin and Greek – her great-uncle was the renowned Italian writer Carlo Levi. She lives in Glasgow.

Tide will be released on 21st February for an RRP of £7.99. For more from Daniela, check out my review of Dreams, and an interview she gave me last year.

A huge thanks to Black and White Publishing for letting me take part in my first ever cover reveal!
- January 14, 2013