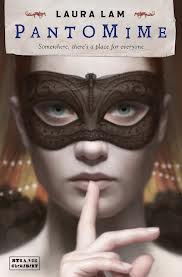 Pantomime is almost certainly the best fantasy of the year. That's virtually all I can say about it without getting deep into spoiler territory, which as regular readers will know, I hate. (Oh, actually, I can probably just about tell you that there's a circus in there as well without completely ruining it for you.) I'm not sure whether to praise LR Lam for writing such a phenomenal book or curse her for writing one that's almost completely unreviewable. There's such a big twist early on (which, admittedly, I guessed), that I can't even really say much about the start.

I'll try and say what I loved about it without actually referring to the twists and turns of the plot. Firstly, there's stunning world-building. Lam has created a world in which magic used to exist but seems to have disappeared, leaving only remnants such as the mysterious substance Penglass. Inside this big world, she's also created a fabulous society of circus misfits who are reliant on each other to earn a living but have their own intrigues, quarrels and love affairs. She's populated it with brilliant characters, capable of love, heroism, and cruelty. It's a book which looks at bullying, romance, family, and perhaps most impressively, issues about sexuality that are normally found only in a handful of contemporary books. All of these things have been woven perfectly into the rich tapestry of Lam's fantasy world, and feel every bit as natural to the world and as important, as the fantasy trappings like the Penglass and the Vestige.

This is one for open-minded readers, but it should be one for absolutely every open-minded reader. (It should also come with a box of tissues - while I cry my eyes out fairly regularly at many contemporary novels, I'm fairly sure that this is either the first or second fantasy ever to have that effect on me.) As if to prove there is no end to her talent, Lam actually manages to give us a cliffhanger ending which I thought worked really well. (She tidies up enough of the storyline to give us a proper conclusion, but it still had me desperately wanting the sequel right this minute!)

If it's not clear enough, absolutely massive recommendation as one of the very, very best of the 200 plus novels I've read this year, and I'm sure this will be a huge success.
- December 06, 2012