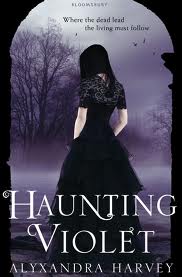 Violet Willoughby is the daughter of one of England's foremost mediums. With her mother in high demand, she follows her, assisting in her work as she puts the cream of society in touch with their dear departed. Of course, it's all fake. Violet has spent seven years helping her mother con the gullible into believing she has real psychic powers, so Violet herself certainly doesn't believe in ghosts. Which makes it all the more surprising when one appears to her…

Rowena drowned last year in mysterious circumstances and is desperate to communicate with Violet so that she can expose her murderer. With Rowena's twin sister Tabitha possibly in danger, Violet must desperately try to find out who the killer is.

Violet is a really good heroine – likeable, spunky and clever. She's helped in her quest to solve the murder by her friend Elizabeth and the dark and handsome Colin, an orphan rescued by her mother, and the relationships between her and the other two are very well portrayed. Add to that her entertainingly dreadful mother, who provides much needed comic relief in between the thrilling search for the person who killed Rowena, and you have a host of interesting characters. I also loved the descriptions of the fake séances and the tricks with Violet, Colin and her mother used to convince people of her mother's gift – ingenious and a great insight into Victorian charlatans.

It's not perfect – I felt the ending was somewhat rushed, and it seemed rather convenient that Rowena's ghost had quite so much trouble in pointing out her murderer – but this is clearly a significant step up from much of the paranormal teen fiction out there today and deserves to find lots of success in a rather crowded market.
- December 02, 2012