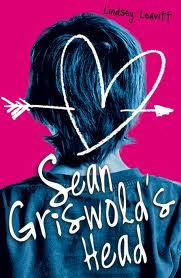 When she finds out her dad was diagnosed with MS some months ago, but no-one had felt the need to tell her, Payton's world starts to fall apart. So much so, that when her new counselor suggests picking something as a Focus Object to write about, she decides to go for it, and chooses Sean Griswold's head. But what starts off as a supposedly academic study of the said head becomes something rather more interesting, as she realizes that Sean himself might be someone worth focusing on.
While the whole Focus Object part of this book was what got me interested in reading it first, sticking out as a rather original concept, in the end any teen romance is going to live or die on its characters. Luckily, Sean Griswold's Head succeeds massively on this front – the central trio of Sean himself, narrator Payton, and her best friend Jac are utterly adorable and had me rooting for the three of them right the way through this charming book. Add a strong supporting cast, particularly Payton's family – all trying in their own way to deal with her dad's illness – and you have a surefire winner on your hands.
I think perhaps the strongest part of the novel is the way the characters, and the relationships between them, develop. Everything feels utterly realistic, the way Payton's family tried to shield her from the truth about her dad's MS felt completely frustrating but also very believable, while her romance with Sean and the ups and downs of her friendship with Jac move at a near perfect pace.
It's also really, really, easy to read, thanks to some sparkling dialogue and a great narration by Payton, who's smart, funny, and near obsessed with Seinfeld. If she sounds like the kind of character you'd like to spend some time getting to know, drop everything and go get this one now! However, just because it's so readable doesn't mean it's afraid of tackling tough issues – the effects of MS are clearly shown, and the way it hits Payton's dad and his entire family struggle to cope with it really bring home the suffering inflicted by the disease.
Overall, this is an extremely strong recommendation and goes down as one of my top few romances of the past few years, alongside books like Amy & Roger's Epic Detour, The Sky Is Everywhere and Skin Deep.
- November 03, 2012