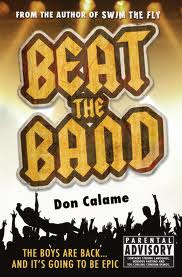 This is a sequel to the superb Swim the Fly, but for once I’ve pretty much avoided spoilers in this review!
It's a welcome return for the trio of Matt, Sean and Cooper from the earlier book, but there's a significant difference, as Cooper - something of a zany sidekick in the original - takes centre stage here. Moving on from wanting to see a naked girl last year, this time his goal is to go all the way with a girl. Things are looking bad for him, though, when he's paired up for a health project on safe sex with social pariah Hot Dog Helen. Deciding the only way to overcome the humiliation of association with her is to give the school something else to remember him for, Coop persuades the other two members of the trio to enter the Battle of the Bands competition. Can any of them play an instrument? Oh, come on, what do you think?
As much as I liked Matt, I have to say that Cooper, who's cruder, far more brazen, and at times completely obnoxious is, if anything, an even better narrator. Taking the place of Matt's horny grandfather in the crazy adult role is Coop's father, who's unemployed, has memories of his own band, and is a complete scene-stealer - an early part with him showing Cooper how to put a condom on is rather too excruciatingly hilarious to be read in public without attracting some really strange looks (as I found out to my cost on the bus into work!), while the rest of his appearances are just as fantastic. Cooper and his dad are the real stand-out characters for me, but the rest are well drawn as well, especially Helen, and Valerie (who I really loved in the earlier book.) Special mention goes to the dialogue, which is just perfect – perhaps unsurprisingly for a screenwriter, Calame captures the way teenage boys talk to each other, with virtually ever other sentence being an insult without any real meaning behind in, brilliantly.
Like Swim The Fly, this is unashamedly lowbrow. In fact, I’d describe it as the written equivalent of something like American Pie (still my favourite of that genre of teen comedy, so I mean that as a wholehearted compliment; I appreciate not everyone would!) Buried beneath the coarseness and vulgarity, there’s a huge heart here and the ending left me with an absolutely massive grin on my face. It also zips along at a cracking pace – so much so that I finished it in just two sittings, I was so reluctant to put it down. (It would have been one sitting but the day job got in the way!)
Extremely high recommendation to teen boys in particular. I haven't got round to reading book 3, Call The Shots, yet but am really looking forward to it!
- November 11, 2012