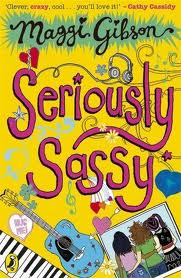 13-year-old Sassy is an environmentalist who wants to be a singer-songwriter, letting people know about the big issues and doing her bit to save the world. This has led to a couple of, shall we say, embarassing, moments in the past. To avoid any more of these when her dad decides to stand as an MP, he offers to pay for a demo CD recording if she behaves herself. But when Sassy finds out some major local news, she has to decide whether to keep quiet and get the cash for the demo recording, or speak out and risk losing her dad the election.

I picked this up in the library, having never heard of it before, and was surprised by how much I enjoyed it. Gibson has a light touch which makes it an easy read, and her characters are well-portrayed - particularly Sassy herself and her family. I also really appreciated the fact that the choice to make was a bit more of a difficult decision than it often is in books of this kind. While normally it would be fairly obvious that Sassy should speak up and win a small victory, there's the potential for both her and her dad to be in a better position to improve things if she keeps her mouth shut and takes the demo disc.

Overall, the environmental message is strong but it never feels preachy, it just feels right for the characters. I also liked the love triangle between Sassy, hunky Magnus Menzies, and her ex-best friend Megan's stepbrother Twig. (Yes, that's right, I liked a love triangle for the fourth or fifth time this year - that may be a record!) I also thought the rivalry over Magnus between Sassy and Megan was well-written and thought the relationship between the two former friends was very realistic.

There are a couple of sequels which I haven't read yet but will definitely be keeping an eye out for. Recommended read for younger teens looking for something light-hearted but with a bit of depth.