Thursday Thoughts: Book Review of Between The Lines by Tammara Webber 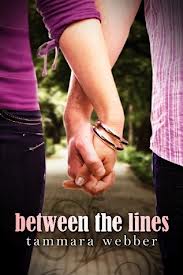 Emma is a seventeen year old actress, thrust into the spotlight in a modern adaptation of Pride and Prejudice with a co-star who half of America's teens are drooling over. Reid is a Hollywood heartthrob with an ego the size of Los Angeles and a reputation as a player. When the two meet, sparks fly - but can Emma trust the superstar, or would she be better off going for the less-exciting but more sensible Graham?

I picked this up after loving Tammara Webber's Easy, despite there being a love triangle at the centre of it. (For those who know my feelings on love triangles, that's a real sign of confidence in Webber as an author!) There's significant differences between this and Easy - this fits far more into YA than the 'New Adult' genre Easy's one of the standard bearers. In addition to the characters being slightly younger, there's a lighter tone.

The dual narration from Emma and Reid worked pretty well here - Emma is a brilliant character who I really grew to care for, Reid is well-written but punchable. Very punchable. To the point where every 5 pages I was thinking "I REALLY want to punch this guy." I can't recall many other instances where I've actually wanted to inflict physical harm on a narrator, so props to Tammara for making me feel strongly about him! I liked Graham, and was rooting for him and Emma to get together right up until she finally made her choice - I was genuinely intrigued as to who she'd pick, and couldn't have predicted it with any certainty at any point.

I also really enjoyed the setting as the three teens and the rest of their co-stars filmed the movie, while trying to party as much as possible and avoid the unwanted attention of fans. Emily, Emma's best friend back at home, provided an interesting counterpoint as well, living a much more normal life and checking out the Hollywood rumour sites to let Emma know what was being said about her without Emma having to see hurtful stuff for herself.

Overall, I thought this was a fun read and will definitely pick up the next one in the series.