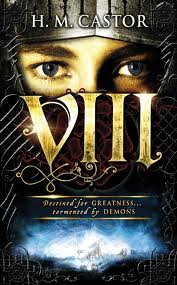 Hal is a young boy who believes he is destined for greatness. Despite his father's disdain for him, and preference for his older brother Arthur, Hal believe that he is the subject of a prophecy. He thinks that his 'glory will live down the ages'. Is he right?

I'll leave it up to the reader to decide - Hal is Henry VIII, and while his name has certainly survived the four and a half centuries since his death, 'glory' might not be the word that springs to mind when you think of him. Here, though, HM Castor has created a compelling portrait of one of history's most infamous characters, both as a charismatic young teenager and as an aging, tyrannical king. Henry is an outstanding narrator but the rest of the cast are also really well-drawn, with two of my favourites being Thomas Wolsey and Thomas Cromwell. Castor studied history at Cambridge so it's no surprise that she also captures the period with real authenticity.

It's cleverly paced, with lots of jumps forward in time to important scenes. I've seen a few reviews suggesting it moves too quickly towards the end, but I think it's judged very well - when you consider that he was married to Catherine of Aragorn for well over twice as long as the other five wives put together, it's no surprise that the pace of the novel picks up considerably towards the end.

In some ways, I'm surprised this is being marketed as YA. While the book starts with Hal as a child, and moves on to show him during his teenage years, a large amount of it takes place later in his life. I think it has serious crossover potential and will be welcomed by adults and teens with an interest in the Tudor period, or just looking for an exciting historical novel.