(I was provided with this book by the author in exchange for a fair and honest review.) 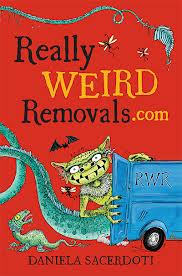 Twelve-year-old Luca and his younger sister Valentina don't know their Uncle Alistair, who had a row with their father about a decade ago. When Alistair returns to the Scottish island of Eilean to try to put things right, their dad doesn't want to have anything to do with him - but when Luca and Valentina meet him and the ghost he's brought with him, they're desperate to help their uncle with his Really Weird Removals Company. While their parents think they're helping to exterminate ants and cockroaches, they're actually relocating mermaids, sea serpents and trolls - but not everything out there is friendly.

This is a charmer of a book with fun characters and a light touch which means even the introduction of baobhan sith (Scottish vampires), dragons and kelpies doesn't make it too scary for youngsters. I particularly enjoyed the central quartet of Luca, Valentina, Alistair and the ghost Camilla, but the various creatures they encounter are clearly described and easy to imagine. (The entries in Alistair's Scottish Paranormal Database do a great job of this, as well, and provide some tantalising teases for possible chapters of a sequel!) It's also great to see creatures like kelpies, selkies and stone fairies rather than the 'usual suspects' when it comes to monster fiction.

Throughout the entertaining confrontations - most of which are solved by helping the creatures people are complaining about - there is a strong central story as Alistair tries to repair his relationship with the children's father by showing him how responsible he's become. I really liked the satisfying resolution but would definitely be interested in reading more of the pair's adventures if there was a sequel in the future.

Definite recommendation to children looking for a funny and cleverly-plotted read.

There's also a rather fabulous website to go with it over at www.reallyweirdremovals.com!