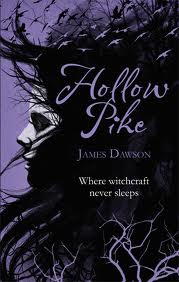 Lis London has troubles in her life. She's been badly bullied by girls at her old school. She has bad dreams about an unseen assailant trying to kill her. Moving to Hollow Pike to live with her older sister Sarah is meant to be a fresh start. Except as soon as Lis gets there, she seems to recognise the location of her recurring nightmare. Then there's a death... and Lis starts to wonder whether the rumours of witchcraft are more than just rumours. Will the new start she'd so looked forward to turn out to have a gruesome end?
I think I have a problem when it comes to books like this. I read a substantial amount - averaging a book a day recently - of which a relatively small number of books are horror or scary thrillers. For some reason, I always seem to end up reading the most frightening books late on Sunday evening. So at half-past two in the early hours of Monday morning, for about the fourth week out of the last six, I was yet again sat bolt upright in bed petrified of going to sleep after finishing this wonderfully atmospheric, totally enthralling, and completely terrifying debut novel.
Dawson's writing style is nearly unbearably tense. Right from the first few pages, with Lis dreaming of a mystery attacker and then repeatedly seeing a single magpie - one for sorrow indeed - until the incredible climax, he has the reader fearing for the lives of Lis and her friends. It helps that he's created a really likeable heroine in Lis, and a great bunch of friends. I particularly liked Kitty and Delilah; it's really refreshing to have two characters who are in a same-sex relationship without that being the focal point of the book. As a former teacher, it's perhaps no surprise that Dawson does a great job of capturing the malice and bitchiness of teen girls so well, but this definitely makes the novel stand out as particularly realistic in its portrayal of school life. Another really strong point is Hollow Pike itself, which is one of my favourite locations for a while. Like Winter in Ruth Warburton's wonderful A Witch in Winter, it's a place which has decidedly more to it that meets the eye - as do some of it's inhabitants!
Overall, this is a really strong recommendation - although please take my advice as the voice of experience and read it in bright sunshine rather than the middle of the night! I look forward to seeing more from James Dawson in the future.

If you want to find out more about James, check out his website or talk to him on Twitter.