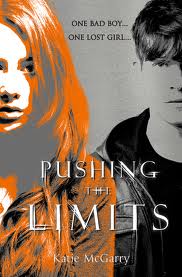 Echo used to be popular. Until a particular night when something happened, leaving her with scars on her arms and a blank space where her memory of that night should be. As if having a stepmother who used to be her babysitter and a brother who died in Afghanistan wasn't already making life hard enough, she's trying to work out if she'll ever recall what she went through. Then she meets Noah, who shares a therapist with her and is nearly as damaged as she is. Torn away from his beloved younger brothers after their parents died, he's desperate to become their legal guardian when he turns eighteen – but with a hot temper and a dubious academic record over the past couple of years, is there any way a judge would choose him over the foster parents they're currently living with? Could these two broken teenagers help each other to heal?
It's a fair while since I've read a book which had a cast quite so strong as this one. Echo and Noah are an excellent pair of narrators who have great chemistry between them but what really stands out is the supporting characters. Noah's foster family aren't going to win any awards for parenting skills but are interesting, with realistic flaws and good points. His brother's foster parents, Echo's father and stepmother, her therapist Mrs Collins, and even her jock ex-boyfriend Luke all have moments when they're likeable and others when I could happily have strangled them. Going back to Echo and Noah, though, their growth as characters as well as the romance is really well done and they develop very realistically, while McGarry captures both of their voices brilliantly in the dual narrative.
The novel also benefits from an intriguing plot with some revelations which really took me by surprise, and from moving at a fast pace – I definitely found it hard to put down once I'd started it. Throw in a satisfying ending which left me guessing right until the last few chapters but finally provided a clever, well-plotted resolution, and you have one of the best contemporary teen novels of the year so far. I'm already eagerly anticipating McGarry's follow-up, 'Dare You To', centred on Noah's friend Beth.
- October 14, 2012