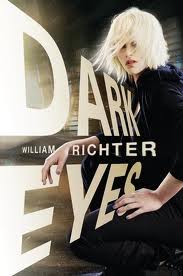 Born in Russia but brought up in New York by wealthy adoptive parents, before rejecting them to live on the streets with her friends, Wallis Stoneman has never known too much about her past. This lack of knowledge might turn out to be deadly, though, when a chance encounter leads to her being given a letter from her birth mother. As Wally tries to track her down, she and her friends enter a murky world where the stakes are high, the truth is hidden, and every move they make could be their last.
As the plot summary suggests, this is a thriller and it won’t disappoint anyone looking for a high-octane, exciting read. Richter has created a really strong heroine in Wally, sympathetic support from her street crew, her adoptive mother, and the detective trying to track her down, and some especially memorable villains. He also impresses me with a fast pace and realistic action scenes – perhaps unsurprisingly, as his background is as a screenwriter and he definitely makes it easy to visualise the big set pieces here. Wally has been trained previously in both mixed martial arts and shooting, which makes her being able to handle herself against tough opposition seem more believable than some characters doing this sort of thing is. It’s also a book which I can see having major appeal to a crossover audience rather than just teens – in a similar vein to The Book of Blood and Shadow by Robin Wasserman it feels more like an adult thriller than a teen novel in places.
That’s not to say it doesn’t have flaws – for a start, it’s a tad on the predictable side (in fairness to Richter, this definitely isn’t helped by a blurb on the back of the book which gives far too much away – avoid reading it!) There are also a couple of faltering moments when the plot seems to descend into slightly jarring psychobabble for a sentence of two, although they’re offset by some superb turns of phrase, my favourite line being Wallis was an angry and defiant twelve-year-old when she began the training. After two years, she was an angry and defiant fourteen-year-old who now knew fifty different ways to cripple a man. As those sentences might suggest, by the way, it’s probably not one for younger readers – there’s lots of violence and a bit of (tastefully described) sex.
Overall I’d happily recommend this one to both older teens and adults wanting to read a quick-moving thriller and will definitely be keeping an eye out for Richter’s next novel.
- October 21, 2012