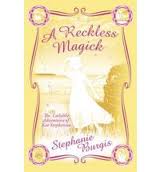 Warning - this review contains spoilers for A Most Improper Magick and A Tangle of Magicks, the first two Kat Stephenson books. Read at your own risk!


Kat's sister Angeline is about to be married, and the twelve-year-old witch is off to the wedding. But where Kat goes, chaos quite often follows, and this is no exception - can she fight off smugglers, make sure the wedding goes off smoothly despite Angeline's fiance's mother's objections, deal with the person following her, prepare for her Guardian initiation ceremony and find out the truth about her mother? I genuinely wasn't sure when reading this - as wonderful as Kat is, there are rather a lot of challenges there! It was a tense read which had me desperately hoping Kat would make it through.

Speaking of Kat, when reviewing book two, I said ''With a little over eleven months of the year to go, it's hard to imagine I'll read another book with a central character as loyal, feisty, clever and altogether wonderful as Kat is." There's actually been one book with two such characters - Code Name Verity - but it's a close run thing! As ever, she is utterly superb and my enthusiasm at the thought of reading the final book in this trilogy was only dampened by the knowledge that this appears to be the end of Kat's adventures.

What a wonderful, satisfying, and completely brilliant ending, though! Stephanie Burgis' writing hits new peaks here, with her usual perfect plotting and excellent dialogue being complemented by some great new characters. In addition to the mysterious marquise, who seems to know Papa from a long time ago and leaves Kat wondering if her mother had a secret the children had never been told, there's a dangerous new enemy, and a potential love interest for Charles. As for Charles, the drunken gambler is so much reformed that he practically counts as a new character himself - and his watchfulness over Kat, who's never been keen on being looked after, provides some of the book's funniest moments.

As you can probably guess, this - and the rest of the series - are an absolutely massive recommendation. For anyone who loves historical fiction, or magic, this is an absolute must-read!

If you're a fan of Stephanie's, check back tomorrow for an exclusive interview with her, by the way!