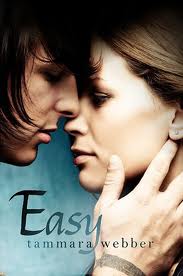 Jacqueline gave up her dreams of becoming a classical musician to follow her boyfriend Kennedy to college. When he dumps her, it hits her hard – so hard she starts skipping classes and, as a result, failing economics. Dragged out to a party by her friend to help her get over the break-up, instead she faces terror as her ex’s friend Buck tries to rape her. A mysterious stranger, Lucas, intervenes to save her, and when she realises they share economics, she starts to wonder whether he could take her mind off Kennedy. She’s also receiving e-mail tuition from an older student she’s never met, who seems to be flirting with her. Soon, though, she realises that Buck hasn’t forgiven her for escaping his attentions, and she’s forced to try to find the courage to take a stand against him.

Easy has become something of a sensation over the past few months. It was self-published by author Tammara Webber back in May, and hit the New York Times bestseller list the following month. Last week, it was picked up for UK release by Penguin under their Razorbill imprint and will be out in paperback in January.

It’s easy (sorry, couldn’t resist!) to see why this one has had the levels of success that fairly few self-published books have come close to. Webber has created a number of really compelling characters here, including an intriguing love triangle – and this is coming from someone who can’t stand love triangles - while the college setting is well-described and the author transports us to a world of studying, partying, and extra-curricular activities with great skill. I also thought the message of the book was very strong (without preaching) and loved Jacqueline’s character development through the book, while there was one speech from a relatively minor character which had me wanting to stand up and cheer, both because of the message it gave and because of how well it was written.

Webber describes it as being written for a ‘Mature Young Adult/New Adult’ audience. For those who haven’t seen the ‘New Adult’ label before, it seems to be being used to describe readers who are college-aged or thereabouts. There’s enough steamy scenes here that it’s significantly more mature than most books you’d find in the teen section of a bookcase, but there’s nothing hugely explicit and I’d happily recommend it to older teens as well as adult readers.

Also, while I don’t normally judge a book by its cover, I think the professionalism of this one really helped it get noticed originally. It’s a sensible font, a gorgeous picture, and wouldn’t look out of place amongst traditionally published book. I don’t know if Penguin will use it next January when the book hits our shelves, but I hope they do.

Overall, very strong recommendation – since reading this I’ve already picked up the first in Webber’s ‘Between The Lines’ series and will definitely be looking forward to her future work.