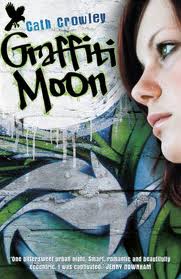 Lucy wants to celebrate the end of school by finding the mysterious graffiti artist Shadow, whose work she's becoming obsessed with. The last thing she wants is to be stuck with Ed, a boy she briefly dated a couple of years ago, especially since that date ended with her breaking his nose after he put his hands in an inappropriate place. Ed, though, is supposed to be able to help her find Shadow, so she puts up with him. During the night, we see the story from both Lucy and Ed's sides as they gradually grow closer to each other.
I've been waiting for this one for ages! Graffiti Moon came out in Crowley's native Australia in 2010 and has been getting great reviews ever since. Add in a cover quote from Jenny Downham, author of the outstanding Before I Die, and the big question became whether this could live up to the hype and my expectations. Thankfully, it did!
Crowley has created a wonderful cast here of smart, artistic, and romantic young people. Ed was never exactly a model student but the people around him - particularly his boss at the paint shop, who died shortly before the novel starts - recognise that he's got huge potential as an artist. Meanwhile, Lucy is a fabulous female lead, who's smart, feisty and really likeable, and the chemistry between the pair of them is absolutely off the charts - I was desperately hoping throughout the book that they'd get together. The supporting cast is also really strong, while the events all happening in one night works very well, making it a pacy and action-packed read.
As great as the characters and plot are, though, the real selling point is Crowley's fabulously lyrical prose, which is an absolute pleasure to read. There are gorgeous lines on virtually every page, I was going to put a few examples in this review, but it's so hard to narrow it down to anything less than a few dozen that I think I'll let readers find out for themselves instead. Her descriptions of the artworks created by various characters - not just Shadow - are also superb and really make them easy to visualise. Finally, I loved the poetry written by Poet, Shadow's friend.
Overall this is a really strong recommendation and one that contemporary fans will absolutely love.
- September 02, 2012