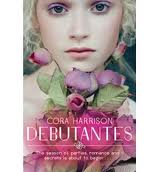 The year is 1923. Everyone who is anyone is enjoying themselves in London, coming out as a debutante and eagerly anticipating the royal wedding. But the Derringtons aren’t really anyone – they’re stuck in their run-down house in the country with their father and their great-aunt, without the money or fashionable dresses for eldest sister Violet to have the season she desperately wants. Can these four young ladies make their way in the world?
Cora Harrison’s new book features a charming set of characters – notably the three youngest of the Derrington sisters. Jazz musician Poppy, aspiring film director Daisy, and clever Rose, always making up stories, are absolutely lovely. Violet is less easy to warm to but definitely feels realistic, with her social climbing ambitions just what you’d expect for the time period – and to be fair, not completely selfish as one of the reasons she wants to find a husband is so that she’s able to help her sisters have their own seasons.
Add to this a really entertaining supporting cast – I particularly liked servants Maud and Morgan and brooding neighbour Justin, and the believable relationships the sisters had with each other and with the rest of the characters – and a rich eye for detail which captures the feel of the Twenties extremely well and you have a strong contender for one of the best teen historical novels of the year so far. It’s not quite five stars – I’m being really picky here, but one of the plotlines was rather predictable – but it’s comfortably worth four and a half and I’m really looking forward to the next in the series.
Oh, yes – it’s a series, but… there’s an ending! Which actually resolves things! This shouldn’t be quite as surprising as it is but after a recent run of reading books which just end on unsatisfying cliffhangers it was extremely welcome to find one which has got characters strong enough for me to want to read more about them but actually has a satisfying conclusion to the novel.
Definite recommendation to all, absolutely massive one to fans of historical novels.