DOUBLE Sunday Spotlight: When I Was Joe and Almost True by Keren David

In celebration of Keren David's brilliant guest post over at my other blog, YA Contemporary, I thought it was high time I migrated the reviews of her first two books over from The Bookbag. 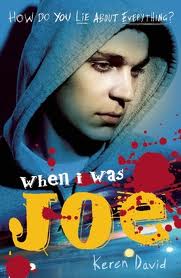 We meet 14 year old Tyler and his young mother Nicki at the police station as he gives a statement about a stabbing he witnessed. Unfortunately for them, some of the people involved would rather not allow him to testify against them and he's forced to flee for his life, moving into the Witness Protection scheme and starting afresh in a new school. Despite the vicious thugs on his trail, there are certain compensations to life at his new school. Formerly just a face in the crowd at St Saviour's, the mysterious newcomer quickly becomes popular, especially when he gets involved in athletics and is coached by older teen Ellie. Not everyone's happy with the impact he makes, though, and he needs to worry about rivals in school nearly as much as he does about the gangsters who are still trying to silence him. And then he meets a girl with a dark secret of her own…
There are many words to describe When I Was Joe, but the most appropriate one is almost certainly 'Wow'. David's taut style, fast paced plot, and believable characterisation make it utterly thrilling right from the first chapter. Ty is a great central narrator and the people who surround him are really vividly fleshed out, while the quality of Keren David's writing is superb. One scene in particularly – I'll refrain from giving specifics as it's very difficult to do so without giving a major spoiler – is brutally intense and actually surprisingly disturbing to read. That said, there's nothing horrifically graphic here and it's definitely one I'd be happy to recommend to mature teens.
While the premise of witness protection and huge amounts of action made it sound like a book aimed squarely at the young male market, the romance is also really well-handled and both boys and girls are sure to love this one. In fact, it's interesting that the action element is relatively restrained in favour of great character development and the problems Ty faces settling into a new school while having to try to avoid standing out, cope with contact lenses to change his appearance, and lie about pretty much everything. David also does an outstanding job of revealing more and more about the true events of the night Ty witnessed the stabbing, completely taking me by surprise with the way the story develops.
One thing I should definitely mention, though – the ending is a real cliffhanger – it's turned the sequel Almost True into a complete must-read for me and is likely to do the same for anyone else who enjoys this gripping novel. While this is an extremely high recommendation, I have to say it comes with a warning – you might want to buy both books at once so you're not left desperately waiting for the conclusion of the story! (Edit: Make that all three books now!) 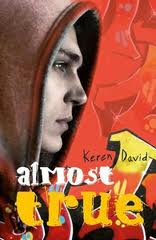 My usual warning when reviewing sequels, there's no way on earth I can avoid some spoilers for the breathtaking When I Was Joe so bear that in mind when reading.
After revealing to his mother and the police that he'd told girlfriend Claire his secret at the end of When I Was Joe, Ty has been moved to a new safe house. Except the house isn't that safe after all, as we find out in a brutal first few pages when the gang on his trail murder his mother's boyfriend in a case of mistaken identity. Losing confidence in witness protection, his aunt takes him away from his mother and gran to be looked after by an elderly couple who he doesn't recognise at first. But while everyone else is trying to keep Ty safe, he's willing to risk discovery to make sure Claire is alright and hasn't succumbed to her own problems. Can he get in touch with her? Will the gang track him down once more, or will he make it to court to testify? And who are the couple he's staying with?
David answers all the above questions superbly well, tying up loose ends from the first book and adding in so much about Ty's background that it's well worth going back to the original and re-reading with the added knowledge gained from this novel. What's most impressive, though, is it never feels like that's what she's doing. She gradually awakens us to Ty's past while never losing focus on telling the story of his present. And as we read, we realise that the lies in his past date back to far before the stabbing which seemed to be the cause of all his problems...
I wasn't sure David could live up to a truly breathtaking debut with the first book of this pair but needn't have worried. This is again storytelling of the highest quality and is thought-provoking as well as exciting. I loved the gradual revelations and the realistic way in which Ty dealt with them, and thought that the mixture of some really complex new characters and the return of some of my favourites from the first book was fantastic.
If there's one criticism I'd make I was slightly underwhelmed by the ending - hard to say without giving much away but I'd expected something slightly different. Nevertheless this is still an extremely easy recommendation to make and I'm really looking forward to reading more from Keren David in the future. (Edit: That was partly because I thought that was the end of the series - having read the third book, I wouldn't make that criticism anymore!)


I reviewed the final book in the trilogy, Another Life, a couple of weeks ago. In addition to the guest post on YA Contemporary mentioned above, you can find an earlier interview with Keren - which is also brilliant - on this blog.

If you'd like to buy any of the three books and want to click on the below links to give me a little bit of commission, I would be hugely grateful!