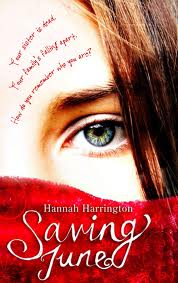 I picked this up on Kindle for just £1.09 after it was recommended by Caitlin over at The Cait Files - many thanks to her for tipping me off about such a great book at such a fabulous price!

Harper has always been the difficult child, much less perfect than her older sister June. When June commits suicide, though, Harper is left trying to cope as her mother falls apart and her father retreats to his new lover. When she finds out that June was hoping to go to university in California, then Harper decides to foil her parents' plans to split her ashes by taking them to California herself. Aided by best friend Lacey and a boy June knew, Jake, she sets off on a cross-country road trip.

I love road-trip books when they're written well and this one was written really well. The central trio of Harper, Lacey and Jake interact really well and the romance that develops is realistic and believable. I also really enjoyed the descriptions of the places they went, while the strong focus on music - including a CD Jake made for June that she was listening to when she killed herself - really appealed to me. (On a sidenote, it was wonderful to find track listings of the 3 CDs made during the course of the book in the back - it's given me lots of ideas for things to listen to.)

Also, the ending was really good, wrapping some things up and providing a definite sense of conclusion but feeling realistic rather than overly neat.

Strong recommendation - it comes with a warning, though - this is a definite tearjerker! Not quite up to The sky Is Everywhere or Code Name Verity levels but a pack of tissues is certainly recommended.