Sunday Spotlight: A Witch in Love by Ruth Warburton 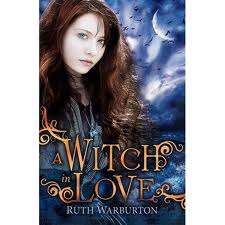 As always with my reviews of sequels, spoilers below for A Witch in Winter - read at your own risk!
Anna has sworn off magic since she accidentally bewitched Seth into falling in love with her. He's convinced the spell has been lifted and his feelings for her are genuine - but she's not so sure. Anna might want to be finished with magic, though - but it keeps leaking out. When a visit to her old home reveals that someone placed a powerful spell which was the reason she didn't discover her abilities until coming to Winter, she's left wishing she knew more about her family history. As if that wasn't enough, the Ealdwitan are still taking an interest in her and she's also being threatened by a group of 'outwiths' who appear to have found out her secret...
As you can tell from that brief summary, it's a book with a lot going on. It all works brilliantly, because Ruth Warburton juggles the various plot strands really well. She's also got a fabulous heroine in Anna, and a really strong love interest in Seth, while I still think his grandfather Bran - who knows Anna's a witch and is furious that she's dating his grandson - is one of the best supporting characters of recent times.
It's also really good to get more of a sense of both Anna's background and family life, and of the world of witchcraft in general, while the setting of the coastal town of Winter is still great and it's interesting to see some more magical locations crop up. Particular mention, as well, goes to the dialogue, which really sparkles - it's one of the most 'British-sounding' series I've read for ages (although there does seem to be a little less specifically British slang in it than in the last one, meaning it's probably a bit easier to follow if you're not from these shores.)
While much of the book is character-driven, as Anna tries to find out more about her past and her mother, it's book-ended by two really strong action scenes and has a climax which left me desperate to get my hands on book three as soon as possible!
Strong recommendation.
- August 25, 2012