My normal Sunday Spotlight, showcasing some of the best books I've reviewed for the Bookbag, is back on Saturday for one week only because the fabulous Susie Day has kindly given me a place on her blog tour tomorrow. This is the first in a series which reboots the Tarzan legend, placing it in modern-day Africa. I've reviewed both for the Bookbag and they're both highly recommended! 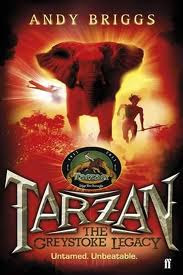 Robbie Canler is on the run. From what, it takes us a while to find out, but it's clear that it's something bad when the alternative is working for an illegal logging team in the jungle of the Congo. The work is tough at the best of times, and when things start going wrong for the team, it's definitely not the best of times. And then Jane Porter, his boss's daughter, disappears... Can she be found? And why do all these strange things keep happening to the loggers? It's almost as if there was a weird presence in the jungle.

I should admit straight away that I'm not particularly familiar with Tarzan. I know the very very basics, including the famous line Me Tarzan. You Jane. being a misquote, but that was about it before reading this book. Thankfully, Briggs has made it very accessible to novices like myself, while a quick check of reviews of the original Edgar Rice Burroughs novels shows that he's stuck firmly to the spirit of those books.

On that note, I have to say that the decision to set this in modern times as a 'reboot' rather than do a prequel as various authors have done with other classic characters recently works really well. It's easy to identify with Robbie, the villains - loggers, poachers and rebels - are completely believable products of our times, and Jane is a great modern-day heroine.

So, good choice of setting, but even more impressive is the way Briggs introduces his lead character. Right at the start of the novel the lord of the jungle dispenses summary justice to a group of posters, killing them brutally, and it's clear that this is a no-holds-barred read with a really wild star. Having said that, it's not particularly gory - the violence is present but never overly explicit, and I wouldn't hesitate to recommend this to mature primary school readers as well as secondary school students. I really enjoyed Briggs' fast-paced writing style, the characters were well-developed, with the subplot of just what Robbie was running from being intriguing, and I'm definitely looking forward to the next in this series.

High recommendation to fans of thrilling adventures! It's also got enough about the destruction of the jungle to be genuinely thought-provoking and open younger readers' eyes to the problems some countries have with these kind of activities.
- August 04, 2012