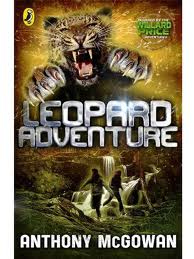 One of my favourite series as a young boy was Willard Price's wonderful Adventure books. Featuring brothers Hal and Roger Hunt, who were sons of the expert naturalist John Hunt, they combined thrilling adventure with lots of interesting stuff about exotic animals.

Given my love of these books, I was both thrilled and slightly apprehensive on hearing a new series featuring Hal's son Frazer and Roger's daughter Amazon was set to be released. I relaxed slightly when hearing it was Anthony McGowan who'd been entrusted with the continuation of the Price legacy - if there's anyone you want getting your hands on a childhood favourite, then one of Britain's top authors for young readers has to be the man.

And, unsurprisingly, McGowan succeeds here. It's a great mixture of the old and new - there's a lot of really up-to-date technology here, and the two teens are now working to rescue animals for conservation projects in the wild rather than to capture them for zoos - but the overall feel and style of the books is very similar to the original fourteen. There's still the same mix of wonderful excitement, great interaction with native helpers, information about various animals slipped in, and truly nasty villains. This was always a strength of Price's in the Hal and Roger series (although there were several times I wanted to strangle Hal for being so damn nice about these guys who were often trying to kill him!) and the showdown with the bad guy here is just as good as any in those books. McGowan also captures the setting of the forests of Siberia really well.

This is definitely one you could read without having tackled any of the originals, but I'd highly recommend them anyway. Apart from anything else, the very end of this book provides a fabulous moment for those of us who've read Price's own series. It's got me eagerly anticipating book 2 of McGowan's.

If you're looking for another continuation of a classic series set in an exotic location, I can't recommend Andy Briggs' update of the Tarzan novels highly enough!
- July 26, 2012