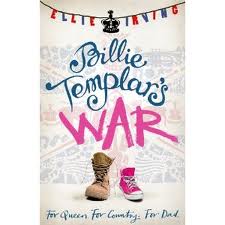 Billie Templar’s dad is abroad, fighting for Queen and country. She wants him home – partly because they need to defend their record of winning the three-legged race at the school carnival, but more importantly because his best friend has just been seriously hurt and she’s worried it could be him next. She hits on a foolproof idea to bring him back – she just needs to ask the Queen herself to give him permission to come back. But getting to see the Queen is harder than she thinks… so she hatches a plan to stage a military tattoo to get the Queen to her village during the Jubilee celebrations. With an allergy-prone boy, a girl who has no friends, a bunch of old age pensioners and a brass band who only know one song trying to help, it couldn’t possibly work – could it?

I really enjoyed Ellie Irving’s first book, For The Record, and was looking forward to this one from the first time I heard about it (during an interview she did with me!) but it completely surpassed my expectations. It’s in turns sweet, really funny, heartbreaking, and massively feelgood. In fact, Irving is becoming one of the authors I’m most likely to turn to when I need cheering up because she writes with such warmth it’s impossible not to read her books with a massive smile on your face. She also manages to fit in some really important messages towards the end of the book with one speech, in particular, without ever seeming to hit the reader over the head with them.

And she has such great characters! While Billie is the undoubted star – and I can forgive her even some rather bratty moments because her heart is so clearly in the right place that even when she starts sounding like an 11-year old Simon Cowell she’s still adorable – the rest of the cast are all fabulous. My personal favourite of the supporting characters was Billie’s nana, but her aunt who’s looking after her, the residents at the old people’s home she’s pushed into volunteering at, and the classmates who help her organise the tattoo are all great as well.

She’s also gone from writing a book which was wonderful, but rather predictable (the subtitle gave it away somewhat!) to writing one which left me guessing right up until the very end as to what would happen – would the Queen turn up? I wouldn’t dream of spoiling it for you… but I thought the ending Irving came up with was absolutely perfect.

Absolutely huge recommendation, a real must-read. (And as if the book wasn't superb enough, I think it may be my favourite cover of the year!
- June 07, 2012