This is definitely one of my favourites of the year so far - even though it's aimed at a slightly younger age than most of the books I review here. 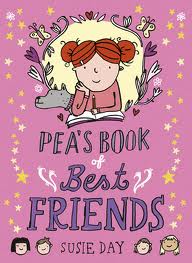 Pea isn't too sure about moving from Tenby to London. Instead of starting secondary school with her friend Dot, she'll be by herself. But now that her mum is a best selling author, things are changing, and Pea and her sisters Clover and Tinkerbell will have to adjust. Can she find someone to fill the Dot-shaped hole in her life (and particularly at the desk next to her in lessons?)
If I start by comparing this book to Edith Nesbit and Noel Streatfeild, I'm concerned people will get the wrong idea and think it's old-fashioned. Nothing could be further from the truth – the characters feel really up to date, especially the Brazilian au pair and the two female doctors who live together next door. Where it does match up to classic authors like Nesbit and Streatfeild, though, is in the wonderful portrayal of family life and the gorgeous relationship between Pea, fourteen-year-old Clover, and seven-year-old Tinkerbell. (Who at times can be a bit of a Stinkerbell, and was nearly called Stegasaurus…)
As well as these fabulous characters, there’s a sweet plot, a lovely message about making friends which is never hammered home too obviously, and a warm, engaging writing style which hooks you in straight away. It’s also wonderfully unpredictable, even the parts which seem straightforward at first – a bestselling author basing her three characters on her three daughters is fairly common in children’s fiction, but one of those characters turning evil and getting killed off must be much rarer! In addition, it’s one of the funniest books I’ve read for ages – I was struggling to contain my laughter virtually every time Tinkerbell said or did anything, while ex-merminate should win the Word of the Year award. And if, by some oversight, there isn’t a Word of the Year award, someone should set one up just to give it to ex-merminate.
Absolutely huge recommendation as one of the best books I’ve read all year and a definite modern classic in the making. I can’t wait for book two!
- June 23, 2012