Sunday Spotlight: Life According To... Alice B Lovely by Karen McCombie

This is one of the best so far of the year in my opinion - even by author Karen McCombie's high standards, it stands out as being superb. 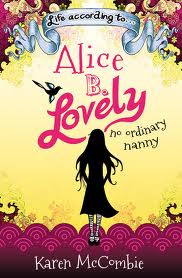 Thirteen-year-old Edie knows that she doesn't need a nanny. She's old enough to look after herself, and her six-year-old brother Stan. Between them, they've managed to scare off nearly everyone who their parents have hired to take care of them. So when a girl of just sixteen starts looking after them after school, Edie is less than impressed. But then the girl, Alice B. Lovely, with her captivating dress sense and strange way of looking at the world, starts to win over Stan... could she be the person to fix Edie's problems?
I'm assuming most people reading the review will have a fair idea of the answer to that one, but even if you're expecting the outcome to be predictable, trust me, this one is so delightful that it's a must-read to see exactly how things do improve! Edie's parents are divorcing, her brother is unhappy, and she's fed up of being treated like a child, particularly by the never-ending supply of Big Fat Phony nannies. She's also perhaps McCombie's least likeable main character ever, at least at the start of the novel - although given this is McCombie we're talking about, she's still fairly sympathetic. However, she's spikey, grumbly, and can be horrible to people, particularly the nannies. Watching the way she gradually changes as things start to get better at home is wonderful, and the development of her character is perfect. Alice, on the other hand, is delightful from her first introduction, and it's easy to see why Edie's parents and Stan are so quickly won over. The supporting cast, as always with McCombie's minor characters, are beautifully fleshed-out as well, with Stan, Edie's friend Tash, and a couple of very special pets standing out as especially good.
I think part of McCombie's magic is that you know exactly what you'll get with her writing. I've read nearly two dozen of her books by now, and if forced I think I'd probably say this was the best. With any of her stories, though, you know that you'll get a heart-warming story, with believable characters, fabulous dialogue, and a plot with enough twists to keep you guessing as to exactly how everything will turn out alright in the end.
Huge recommendation as one that younger teens will absolutely adore and older teens looking for a light read will also find to be well worth checking out.