Book Review of The Boo Hag by David Morgan 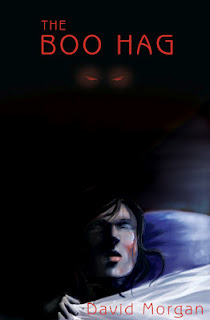 Note: Received from the author in exchange for a fair and honest review.

Lenny Petrakas is worried about her skin. That doesn't make her unique amongst teenage girls, obviously. But while they're concerned about spots, she has something more urgent to take care of. An evil creature called a boo hag wants to take every inch of skin from her body - unless she can stop it. Can the sixteen-year-old girl, along with a ragtag bunch of helpers, protect herself and get rid of the boo hag? And when the hag can take control of the bodies of those it's killed - just how does she know who to trust?

I think I've probably read too many paranormal books over the last few years, because it's been getting to the stage when I feel like I've read every possible idea and nothing stands out as unique. Until recently, at least. Firstly, there was Slide by Jill Hathaway, which I had a couple of issues with but was a great concept and handled pretty well for the most part. Now David Morgan gives us a supernatural story with a creature taken from South Carolina's Gullah culture. Full marks for originality here, as it's the first time I've even heard of a boo hag, which makes a chilling nemesis. As well, the rest of the book lives up to the villain, with a great atmosphere and some really fun interaction between the characters, particularly the central three of Lenny, her best friend Anna, and the hot guy they drag in to help protect them. Anna, who's clearly worried about Lenny but is also loving the chance to get closer to her crush Brian, is particularly wonderful, and is one of my favourite supporting characters of the year so far.

There are a few flaws - Morgan's prose gets overblown at times, with "But fear would not be her paralytic; it would be her catalyst." being perhaps the worst offender. The ending is one that I can see being somewhat divisive, as it finishes off the main part of the plot but leaves a major cliffhanger in place. This kind of thing can irritate me, but in this case I didn't mind - partly because the main bit was resolved well and partly because there's no way on earth I'm missing the second book, as I want to find out what happens with Anna and Brian, apart from anything else!

Overall, I'd certainly recommend this - especially if you're a fan of paranormal books and wants a break from the usual vampires, werewolves, angels, zombies and fairies!

I was impressed enough after reading this to ask David if he'd be willing to do an interview for the blog and he's kindly agreed to that. Check back on Friday 11th May to find out a bit more about The Boo Hag and its talented author!