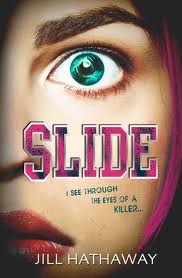 Everyone thinks Vee suffers from narcolepsy. The truth, however, is much stranger than that. She 'slides' into people's bodies when she touches an object they were emotionally attached to, becoming a helpless observer and leaving her body at risk. It's bad enough normally when this happens, as she sees the mean things people do to each other - but it gets much worse when she slides, and finds herself holding a knife and standing over a young girl's body. While everyone else thinks it's suicide, Vee knows Sophie's death was murder - but can she work out whose body she was occupying before the killer strikes again?

Full marks to Jill Hathaway here for creating a paranormal thriller which is really original. I'd much rather read about someone like Vee, with strange powers, than yet another vamprire, werewolf, or fallen angel. That said, I wasn't all that keen on the way her powers changed throughout the book - it seemed to be a little bit too convenient that she managed to develop them in just the way she needed to. Hathaway has, however, created some strong characters, notably Vee herself and her friend Rollins. I really liked the way she captured the bullying which happened to the first victim Sophie before her death - it was pitched at just the right level to be completely convincing.

After a superb start, I did feel there were a couple of flaws, though. In addition to the convenient way Vee's powers developed, the end of the book reads like a bad horror movie, with Vee making one insanely stupid decision and the revelation of the killer and motive leaving me stunned - and not in a good way! Having said that, it's an interesting concept with enough strong points to have me excited for book 2 in the series.