Steve Vernon sent me a copy of his Sinking Deeper for review a few weeks ago, and while I originally had to tell him it would be a while before I got round to reading it due to a backlog in my TBR pile, I read a chapter to try it out and got hooked rather quickly. It's a captivating and surprisingly moving tale, so I jumped at the chance to ask the author some questions. 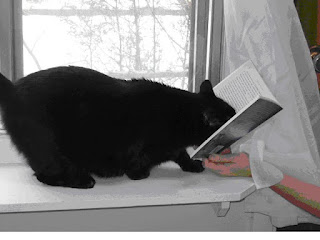 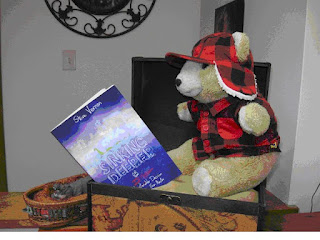 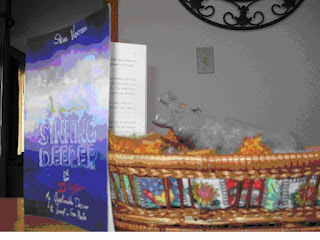 Fab answer! I love your bear, he looks so cute!


2. I loved Granddad Angus in Sinking Deeper! Which fictional character would you have wanted as part of your family?

Actually, I see Granddad Angus as being a projection of myself twenty years from now – although I am hoping that the possibility of my future-self staging jailbreaks, clothesline pole hijackings and random drive-by caber chucking is something I’ll know better than to attempt.

But you never know.

As for fictional characters I have always dug Mr. Bass – the mysterious extraterrestrial scientist from Eleanor Cameron’s wonderful YA sci-fi yarn THE WONDERFUL FLIGHT TO THE MUSHROOM PLANET. 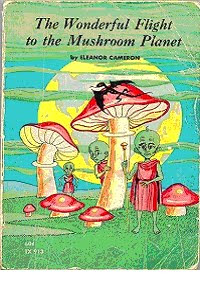 I also thought that Sam Gribley – the boy from Jean Craighead George’s surviving-in-the-woods YA novel MY SIDE OF THE MOUNTAIN was someone I strongly identified with – although if I were to be airdropped into a northern forest I would most likely wake up as grizzly bear poop. 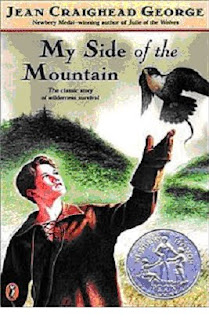 3. If you could see any cryptid for real, which would it be?

I always had a fascination for Old Ned, the Lake Utopian monster from New Brunswick, as well as the wondrous tales of the selkie. I have written of both in several of my ghost story collections as well as my children’s picture book MARITIME MONSTERS – A FIELD GUIDE. 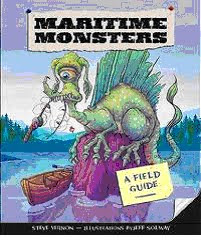 I likewise have always loved the tales of Old Shuck – the dreaded Black Dog who heralds the approach of death to whomever sees him. Kind of like a dog-pound version of the Celtic Banshee. I’m fascinated by the way that this mythical creature has turned up in several different cultures. Here’s a picture of him from Maritime Monsters. 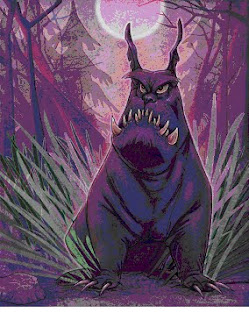 4. If you were throwing a literary dinner party, which six authors or characters would you invite?

Wow. That is a heck of a question. I think, for starters, I’d really love to meet Gary Paulsen (Hatchet), Robert Newton Peck (Bro), Gary Schmidt (The Wednesday Wars), Don Calame (Swim the Fly) and we could sit down and hash out how to turn all of those reluctant reading boys into ravenous readers.

As for the other two invites, I don’t think I’d bother filling them. Why would I? More cake for us.


5. You've written a huge amount of short stories - what's the main difference between writing short stories and a novel such as Sinking Deeper?

You are asking me to describe the difference between a hard sprint and a long marathon.

The fact is – a novel is nothing more than a collection of stories, (although some people insist upon calling them chapters), with a single guiding design.

No matter what I write – whether story or novel – I find that I am best-equipped for the journey ahead if I know two things. Namely – where I am starting from and where I am going to. It is a little like driving from New York City to Sacramento. You know that you mostly just have to head west. What roads you take along the way to get there don’t necessarily to the journey – just so long as you take pains to keep that car primarily heading west.

So once I have the first scene and last scene firmly in my mind, I just have to start from one point and run until I get there.


6. Can you recommend another book you think readers of Sinking Deeper will enjoy while they're eagerly waiting for your next novel?
Well, I’ve already mentioned a few books – but I’d definitely be remiss if I did not mention Jill MacLean’s wonderful YA novel THE NINE LIVES OF TRAVIS KEATING.


7. Do you listen to music when you write? If so, was there a soundtrack for Sinking Deeper?

That’s a straight negative on that question. I like things quiet when I write. Occasionally, I might tune in an instrumental cd – like the theme music from a Godzilla movie – all instruments with no lyrics. I cannot listen to lyrics when I write because I get too darned caught up into hearing all those words that I can’t think of words of my own.


8. What advice would you give to someone looking to write a novel for children?

Get into the gym and start training – because writing for young kids is hard work. Children will not put up with any kind of writerly foolishness. If you want to sit and talk about the weather or the deep-rooted symbolic significance of your left toenail they will have you for breakfast. Children can be one of the toughest and yet most-rewarding audiences imaginable.

If a kid enjoys your work they will run up to you with grins on their faces and a book in their hands saying something along the lines of – “Mr. Author, can you autograph your book for us?”

If a kid doesn’t like your work they will likewise run up to you – only the grins will look suspiciously like the kind of grin you might get from a great white shark’s jawbone – and your books will serve as kindling for either your funeral pyre or your potluck supper.

Would you buy my book? I really need the money.

I am currently working on a young adult novel entitled FIGHTING WORDS. It is a story that has been kicking around in my head for an awful lot of years and it is high time that I put it down on paper. It doesn’t have a thing to do with SINKING DEEPER – except for sharing a maritime setting. However, I have recently found myself thinking about a follow-up novel to SINKING DEEPER – maybe with a different main character this time around.

I'll look forward to reading Fighting Words, and I really hope you write a follow-up to Sinking Deeper!