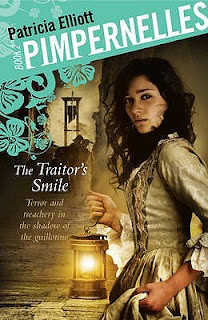 Warning: Spoilers for book one lie below!

At the end of the first book, The Pale Assassin, heroine Eugenie and love interest Julien had escaped the French Revolution but been forced to leave behind Eugenie's brother Armand to face the wrath of the government over the failed attempt to rescue the King. Eugenie is being followed by Guy Deschamps, who she still trusts, despite Julien's duel with him at the end of the first book, not knowing that he's working for the Pale Assassin himself Raoul Goullet.


As the summary suggests, there's a lot happening here. My main complaint with book one, which I generally enjoyed, was that there was an awful lot of build-up compared to a fairly small amount of action. No such problem here! We get chases, balloon flights, plans to break people out of prison, murders, duels… if anything, slightly over 400 pages is too short. We also see some superb new characters. I liked Eugenie as a heroine in The Pale Assassin but the introduction of her cousin Hetta who she stays with in England, a staunch supporter of the revolutionary ideals who works with smugglers and wreckers to help them evade capture, really adds to the book. The relationships between the pair of them and the rivalry over Julien, Guy, and two other young men who play significantly bigger parts in this book than they did in the first is excellent – it adds spice to their interactions while never taking away from the adventure. Goullet and Deschamps are also first-class villains, complete cads and I was desperately cheering on the heroes and heroines hoping they'd give them their just desserts! On that note, the Pimpernelles title makes far more sense here than it did in the first one, with the plot actually reading like something out of the Scarlet Pimpernel rather than just being a title shoved on it because of the time period.


A particular mention is deserved, by the way, for how well Patricia Elliott managed to capture the feel of both England and France in the late 18th century during the French Revolutionary Wars and the feelings of the poorer people towards the government during the Reign of Terror. I felt I learnt a lot about the time period when reading the book and was really looking forward to the next one in the series – only to find there isn't one! Sadly, two books is all we're getting of the Pimpernelles, although we at least get an epilogue which rounds things off fairly nicely.


High recommendation here and it's worth checking out The Pale Assassin as well, despite the slow start to that book.


For more superb historical fiction - this time with a dash of magic thrown in - and a wonderful heroine, don't miss the first two Kat Stephenson stories, A Most Improper Magick and A Tangle of Magicks, by Stephanie Burgis.
- April 21, 2012