Saturday Spotlight - The Monstrumologist: Isle of Blood by Rick Yancey

Saturday Spotlight is a new feature where I'm showcasing some of the books I've reviewed for The Bookbag by posting reviews here for the first time. I'm generally trying to use it to promote books which people may have missed originally, but chose a slightly more popular one here as it's so fantastic I wanted to have a review on the blog.

Warning: Spoilers below for book 1 in this excellent series, The Terror Beneath, and book 2, Curse of the Wendigo. 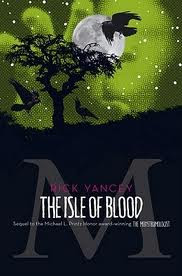 The year is 1889, the third of young Will Henry's apprenticeship with Pellinore Warthrop. The peace - such peace as there ever is in the life of the monstrumologist - is rudely shattered by the arrival of a poisoned sailor from Whitechapel, half-mad with despair, delivering a package from the doctor's old nemesis Jack Kearns in the hope of finding the antidote to the toxin Kearns has infected him with. So begins a quest for Will Henry and Warthrop which will see them look for the holy grail of monstrumology, the nidus, and lead to their most exciting and horrifying adventure yet.

Having enjoyed the first book in the series, and thought the second quite wonderful, I'm completely in love with this sequence now. Part of the reason I love it so much is the characters, and the wonderful relationship between Warthrop and Henry, who is gradually developing from a somewhat scared young boy into a figure far more complex and interesting, if not necessarily a traditional hero. Part of it is the fabulous action, and the way the gore seems to have been ever so slightly toned down so it will still appeal to the target audience of teenage boys but those of us with slightly weaker stomachs can enjoy it without needing a sick bucket for the worst scenes. Part of it is the vivid descriptions of the world in the late nineteenth century, and the appearance of real people like Arthur Conan Doyle. But mostly, I think, above all of them, it's the breathtaking, blissful, wonderful language that Will Henry uses looking back on his childhood. A face is beatific, a man may be querulous, while some of Warthrop's rants are spellbinding in their use of words. I love the way Yancey completely refuses to write down to his target audience - there are words here which I'm one hundred per cent sure most readers will never have come across before, but they never slow down the pace of the story because they're used in the perfect context, and readers will either pick up the general idea or be driven to a dictionary to seek out the meaning. When you read Yancey's writing, it feels important. Never pretentious, never overblown - but Henry's carefully chosen words bring home the giant of a man who is the monstrumologist, and the torment he faces as he realises the effect his chosen profession is having on the youngster. Oh, and five hundred pages for a young adult novel generally has me complaining a book's ridiculously long, but I honestly didn't even notice the length when reading I was so entranced.

Simon and Schuster announced a few weeks ago that this would be the last book they published in Yancey's series, a decision which caused widespread panic and frantic cries of Say it ain't so amongst book bloggers. Thankfully, the reaction was so strong that within a week or so, they announced they'd reconsidered and we will get at least one more volume of Henry and Warthrop's adventures. With the framing story telling us early on in this book that Will would go on to marry Lilly Bates, who he meets again briefly in this part, but leaving us hungry for more about the rest of his life and the reason for his unusual longevity, I could personally live with at least half a dozen more - here's hoping!

Huge, staggeringly big, absolutely massive recommendation as the best book yet in a superb series.

If you like Victorian horror, then Jon Mayhew's Mortlock books - starting with the title novel - are superb.
- April 13, 2012