Saturday Special: Book Review of The Things We Did For Love by Natasha Farrant 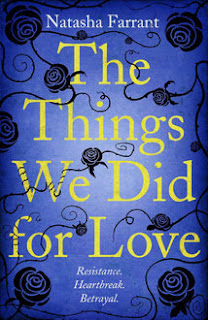 In a small village in South-West France in the final years of World War II, the Resistance fight against the occupying Germans. Against this backdrop, Arianne falls madly in love with Luc, who has returned to the village after a long time away. They seem perfect for each other – but Luc has a dark secret in his past, and is desperate to make up for it, leading him to become involved with the fight against the Nazis. When someone else becomes jealous of Arianne’s feelings for him, tragedy seems inevitable.

It was, in retrospect, a mistake reading this straight after Code Name Verity, my favourite book of the year so far. Not for the reason I half-expected, though. I nearly left it for a while because I was worried that no other World War II novel could compare to the fabulous CNV - but this one holds its own. The reason reading them in succession was a mistake is that I ended up crying so much over a period of a couple of days that my eyes took ages to recover.

It’s truly heart-rending, it has a wonderfully drawn cast of characters – I fell completely in love with about six different people at various points in the book – and Farrant’s writing style is utterly beautiful. Massive recommendation as one of my top few of the year so far. I appreciate this is a rather short review – as always, with the books I really loved I find it very difficult to say too much because I’m always petrified of spoiling them – but it really is one you should rush out and buy.