Having said February was an unbelievably strong month for books, I found the first half of March was struggling to match up to it but still had some books that were well worth reading. Then we got to the last week or so, in which I read three which were staggeringly good, to the point I've had to do a top three this month instead of just a 'Book of the Month' because I couldn't quite bear NOT to acknowledge the brilliance of 2 of them.

The Gathering Dark (published as Shadow and Bone in the US) by Leigh Bardugo - I have slightly mixed feelings on this. I enjoyed it and thought it was a well-written fantasy slightly let down by a rushed ending. From what I can see, virtually every other book blogger out there has got it down as one of the best of the year so far. I'm a slightly dissenting voice here - it was good and I'd recommend it, but it's not up there with the really top fantasy books (like the Moorehawke trilogy or Daniel Abraham's stunning The Dagger and the Coin) for me. Still worth reading, though.

Boy Proof by Cecil Castellucci - I wasn't reading much YA back when this was published in 2005, but I picked it up from the library and was really glad I did. It's a lovely, sci-fi tinged, coming of age story about a girl obsessed with her favourite movie and not interested in romance - until she meets a particular boy. Well worth taking a look at.

Pieces Of Us by Margie Gelbwasser - Staggeringly bleak, this is a compelling and exceptionally powerful look at some terrible events including cyber-bullying, sexual abuse and blackmail. It's not one you're likely to enjoy but it's very, very well-written. Margie was kind enough to give me an interview.

Torn by Stephanie Guerra - Hard-hitting contemporary which stood out as the best I read in the first half of the month. Guerra's debut YA novel fizzles with great characters and a red-hot plot. Look out for an interview with Stephanie nearer publication date, by the way!

Illegal by Miriam Halahmny - Wasn't overly keen on the characters here, but thought it was well plotted. Worth a look for fans of edgy contemporary novels.

Invincible by Sherrilyn Kenyon - Despite some good dialogue here this is a massive step down after a very enjoyable start to the Chronicles of Nick series.   I'm not sure whether Kenyon wrote this in a rush or it was poorly edited but there's little of interest going on and some of the writing is dire - notably the use of the word 'pwning' which irritated me beyond belief.

Infamous by Sherrilyn Kenyon - After the let-down that was book 2, Kenyon comes back into form with her best yet in this series. It's much pacier, the writing is better, and it has a strong message about the evil people can do to each other, even without help from demons and other nasties. Good enough to get me really excited about this series despite my thoughts on Invincible.

Vixen by Jillian Larkin - Wonderful writing and an incredibly good setting in Prohibition-era Chicago, along with three interesting main characters, make this a must-read for fans of historical fiction.

Bonehill Curse by Jon Mayhew - It's always a pleasure to read something new by Jon Mayhew, and in his loosely-linked trilogy of Victorian fantasy he's saved the best for last. This tale of a cursed bottle and a vengeful genie is a must-read with a fabulous central character. Check back on Friday for a post from Jon about the inspirations behind the book, by the way.

Alibi by Annie Miles, Isabel Eckersley, John Byrne and Sorrel Provola - Intriguing 'serial novella' follows four teen suspects in the aftermath of the death of a girl. They all had reasons to kill her - as we see through flashbacks - but who did? Well worth checking out. Twist Literary, the new publishers behind this series, gave me a fantastic interview.

The Truth About Celia Frost by Paula Rawnsthorne - Slightly mixed feelings on this one, as I was enjoying it a lot to start off with but found the bizarre ending put me off. I think a lot of people will really enjoy it, though.

Virals by Kathy Reichs - YA sci-fi debut by adult crime writer Reichs is very different from what I was expecting, and takes a while to properly get going. That said, the action once it comes is fast and furious, and I'll definitely be picking up the second in the series, Seizure, sooner rather than later.

Reality Check by Laura Peyton Roberts - It took me 5 minutes and some searching on Amazon to remember what book this was (I'd forgotten to note down the author as well as the title.) As you can probably tell from that, I wasn't very impressed - a shame given how much I liked the first. This one seemed much blander and little happened during the course of the book. I'll probably carry on with the series, since I enjoyed Get A Life, but this seriously disappointed me.

Top three for the month, though...

The Things We Did For Love by Natasha Farrant - It wou have been a worthy winner; I just happened to read two books which were even more exceptional than this one. (I can't imagine that will happen in many months!) Farrant's tragic tale of France in WWII is heart-rending and beautifully written. Absolutely superb. (I keep meaning to review it and haven't got round to it yet.)

Department 19: The Rising by Will Hill - Hill is a genius. No question about it. I generally feel anything over about 400 pages should have been cut down; this runs at about 700 pages in hardback and every word feels essential. Fantastic world-building, awesome characters, and a great plot make this a must-read. Code Name Verity by Elizabeth Wein - Just read it. In my constant quest to avoid spoiling this mesmerising book, I'll just repeat the very basics. World War II, stunning characters, beautifully written, heartbreaking, MUST READ. Elizabeth Wein was kind enough to talk to me about it.

I managed to read significantly more MG this month than last month, including a few really good ones.

Poppy's Hero by Rachel Billington - Oh boy... this was one of the first I read in the month and I decided to pass on reviewing it because I couldn't quite work out what to say and didn't want to give it the oxygen of publicity anyway. Billington is the daughter of Lord Longford, who was a famous campaigner for penal reform. Learning this after reading it, it did at least answer the question as to what on earth the point of the book was. With flat characters and little to hold a reader's attention, it's clearly been written to try and put forward Billington's views on the prison service.

Butterfly Summer by Anne-Marie Conway - Conway takes a break from the Star Makers series to write an altogether darker book. Creepy and atmospheric, I found this a slightly on the predictable side but it was still a good read.

Sinking Deeper - Or My Questionable (Possibly Heroic) Decision to Invent a Sea Monster? by Steve Vernon - I get maybe three requests a week from authors to review their books at the moment, but have such a massive list of stuff to read that I have to turn most of them down. This is one of the very few I've accepted recently (the title captured my attention enough to read the opening chapter and narrator Roland's sarcastic stlye got me hooked) and I'm really glad I did - it's a fast-paced and very readable book with a great setting and a surprisingly moving ending. Steve talked to me about the book as well.

Million Dollar Mates by Cathy Hopkins - Another victim of inflated expectations here. From many authors, I would have thought this was a pleasant enough book to spend an hour reading. From Cathy Hopkins, author of two of my favourite series for teens and younger tweens, it felt like a let-down. The characters aren't as sparky as those in Truth, Dare, Kiss or Promise and Mates, Dates... so I struggled to get into it properly. Mild recommendation if you're a big fan of MG.

Revenge of Praying Mantis by Jane Prowse - First in a trilogy about a girl who discovers she's the 'Golden Child' and is plunged into a battle against ninjas is notable for having a very well-drawn set of characters and a really strong message about standing up for yourself but using force only as a last resort.

Stalking the Enemy by Jane Prowse - As good as the first Hattori Hachi book was, this is slightly better. With the scene and most of the characters already set, Prowse concentrates on giving us some amazing action. Jane Prowse was kind enough to give me an interview.

Big Fat Teen Crisis by Jenny Smith - Engaging central character with a strong narrative voice and a breezy writing style make this one worth checking out.

MG Book of the Month though goes to 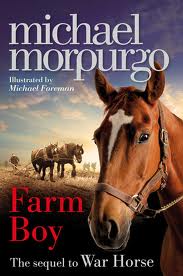 Farm Boy by Michael Morpurgo - Sequel to War Horse is short, but beautifully illustrated and just as well-written as we've come to expect from this wonderful author. Moving, sweet and with a wonderful central pairing, it's a high recommendation.


Highly Recommended (These are all the books I rated 4 ½ or 5 stars this month.)

Hollow Pike by James Dawson
Things We Did For Love by Natasha Farrant
Torn by Stephanie Guerra
Department 19: The Rising by Will Hill
Vixen by Jillian Larkin
Bonehill Curse by Jon Mayhew
Farm Boy by Michael Morpurgo
Revenge of Praying Mantis by Jane Prowse
Stalking The Enemy by Jane Prowse
Code Name Verity by Elizabeth Wein

Recommended (These are the books I rated 4 stars this month.)