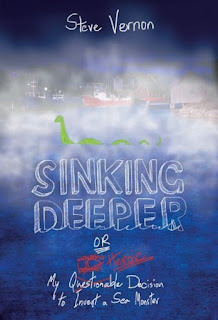 (I was sent a copy of Sinking Deeper by author Steve Vernon in exchange for a fair and honest review.)

Fourteen-year-old Roland MacTavish never expects to move away from Deeper Harbour and his grandfather, who's also his best friend. His mother is the mayor and his father is the police chief - why on earth would he leave the seaside town? But when his parents announce they're divorcing and his mother is stepping down as mayor to move to Ottawa, taking Roland with her, the youngster knows this calls for a plan. Can he, Granddad Angus, and Dulcie the "punk-goth-freakazoid" rejuvenate the sleepy town as a tourist hotspot by creating a sea monster?

I have such a backlog of stuff to read that I nearly replied to author Steve Vernon's request that I reviewed this with a 'thanks but no thanks' e-mail. However, the subtitle intrigued me enough to check it out and I'm really glad I did - this is something of a gem. Right from the opening chapter, in which Angus and Dulcie break narrator Roland out of an unlocked jail cell as it's more dramatic than just tapping on the door, it's a captivating and charming tale. It helps that at rather less than 200 pages long, it's fast-paced, doesn't waste any words, and has a fun and engaging plot. Roland himself and Angus are by far the two best-developed characters - I would have liked to see a bit more of Dulcie, who arguably feels like a bit of a third wheel in the combination for much of the book despite a great introduction to her - but the rest of the cast are fun to read about as well, and the sleepy backwater town is a setting that I loved. Roland has a sarcastic narrative style which works well for the majority of the book although occasionally gets a little bit too much. There are some fabulous quotes, including Roland's optimistic philosophy “A ‘we’ll see’ can always develop into a ‘let me think about it,’ which might evolve into a fully grown ‘why the heck not?’”

I wasn't sure what to expect from the ending but found it to be really sweet and surprisingly moving. I enjoyed this one a lot and would definitely recommend it.
- March 15, 2012