Thursday Thoughts: Book Review of Pieces of Us by Margie Gelbwasser. 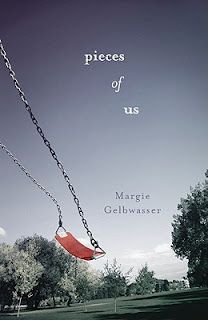 Every summer Katie and her sister Julie meet up with Alex and his brother Kyle at a lakeside community in New York. They leave behind their problems - which are legion - and find comfort in each other. But when a dark secret of one of them leaks out, the four are all left reeling by the far-reaching consequences.

This one goes straight into my five most disturbing reads of all time, with subject matter including rape, blackmail, cyberbullying, and emotional abuse. Margie Gelbwasser is clearly a very brave author - not only does she tackle these issues head on, she does it without providing us with any pleasant characters to root for. As if that isn't enough of a handicap to a novel's success, younger boy Kyle's parts are narrated in the second person, which is almost always thought to be a major mistake. Despite all this, Gelbwasser somehow just about pulls everything together to create a novel which is never less than compelling.

The two brothers in this quartet are Alex, an abusive playboy who practically forces his younger brother to take part in sex acts with various girls, and Kyle, the nearest thing we get to a likeable character and a born victim. From the other family, we get cheerleader Katie, who starts off the novel seeming to have the world - or at least her school - at her feet, and falls from grace spectacularly, and her younger sister Julie, constantly berated by their mother for being in Katie's shadow. Their mother is one of the most horrendously vile characters I've ever read about - I have rarely felt so utterly repulsed by a fictional person.

Given how relentlessly bleak this book is and the subject matter I've seen a fair few suggestions that it should be for over 18's only. As tempting as it is to agree with them, though, I think people saying this are missing the point. Yes, the events of the novel are truly horrific. Yes, it's thankfully rare for things like this to happen. But at the end of the day, sadly, this sort of stuff actually does happen to teens, and a book like this is important because it shows those suffering that they're not alone, and opens other eyes to some of the problems teens endure. What I would say to parents, though, is that if your child is reading this book, then you should find the time to read through yourself and discuss the issues with them. It will definitely provoke some serious conversation. With that proviso, I think I'm probably putting it in 'recommendation' territory because it is exceptionally powerful.

Gelbwasser's writing style is superb and I look forward to reading more from a very talented author - I can't help but hope, though, that the next book she tackles is a lighter read than this!
- March 08, 2012