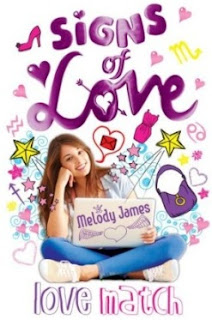 Gemma Stone’s ambition in life is to be a famous journalist – so when a school webzine is started, she jumps at the chance to take part. She quickly finds out, though, that things aren’t as glamorous in the media as she’d imagined, especially when she’s the youngest person involved and gets stuck with the job of writing horoscopes. Then a fluke prediction or two make her new column a must read, and she realises there’s the potential to set up her firend Treacle with the boy she’s been watching from afar… will the path of true love be lit up by the stars?

This starts off seeming like a fairly standard novel for tweens and young teens in many ways, but is quickly lifted a fair way above the crowd due to some interesting characters, excellent dialogue, and a subplot involving Gemma’s younger brother, who suffers from cystic fibrosis. I’m pretty sure this is the first fictional depiction of the disease I’ve ever seen, and it’s handled superbly, showing the devastating effect which it’s had on Gemma’s family but also the way in which she, her brother, and their parents have worked as a team to fight against the condition. Her family are undoubtedly the best characters in the book, but the rest of the webzine team are also well portrayed. The one character I did find to be a bit weak was Gemma’s best friend, Treacle, who seemed to be far too happy to overreact and suspect Gemma of betraying their friendship.

The plot of the book was fairly predictable in many ways but it was still good fun to see what happened, while the breezy writing style – particularly for Gemma’s extremely entertaining horoscopes – made this one very easy to read. The book includes a sneak preview of the second in the series and I’ll certainly keep an eye out for it to see what Gemma does next.

Overall this is a definite recommendation for tweens and young teens looking for a fun read.
- March 10, 2012