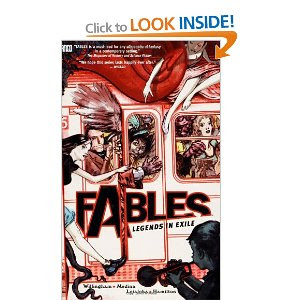 (This book contains the first 5 issues of the Fables series.)

Forced out of the Homelands by the evil Adversary, the characters in Fables have made their way to New York City. Those of them who look relatively human, at least. With Old King Cole as Mayor (in name, at least, despite his deputy Snow White running the show), Bigby Wolf as the Sheriff, and Prince Charming being, well, charming, towards every woman he can, these are characters you’ll already know and love – but portrayed in a way that completely reinvigorates them.

This first collected edition of the comic, containing the original five issues, is spellbinding. From the moment Jack (who’s a mixture of pretty much every Jack in fairy tale lore) reports the possible death of Snow’s sister Rose Red, to the wonderful ending, the dialogue is sparky, the characters are wonderfully captured both in their speech and in their pictures, and there’s just enough backstory given at the start to let readers get an idea of how the Fables came to NYC without drowning them in exposition.

Every character here is a delight, but my personal favourites are Snow and Bigby – although I’ll also cheerfully admit to a soft spot for the pig from the house of straw, who’s escaped from the Farm (where Fables who can’t appear human) live, and is crashing on Bigby’s couch since Bigby owes him a favour for destroying his house.

By the way, this may be a comic, but it’s certainly aimed at adults, or well-read teens, rather than young kids. When we finally learn the details of how the Fables lost the Homelands, it’s told in a way that’s clearly meant to parallel Martin Niemöller’s ‘’First they came…’’ statement, while the denouement is a ‘parlor room scene’ worthy of Agatha Christie – both likely to be lost on most younger readers. Also, Prince Charming boasts of his ‘’cocksmanship’’, and the language used by a few characters is choice.

The artwork is breathtaking – there’s a close-up of Snow after Beauty mentions her ‘’tawdry little adventure with those seven dwarves’’ which captures her restrained fury beautifully, and a wonderful long shot of the hall where she holds court which shows a host of fairy-tale items surrounding the characters, just in the first few pages. The quality stays consistently high throughout the entire book, and makes it a real pleasure to just flick back and look at individual panels once you’ve read the fabulous story in full.