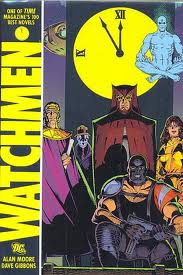 The Comedian is dead. In a world where costumed vigilantes have been outlawed and former superheroes are either retired or working for the government, the murder of his former teammate leads the outlaw Rorschach to investigate. What he finds could change the world...

Bleak, thought-provoking, and featuring an ending which is one of the greatest ever in any medium, Watchmen is an absolute must-read. I have read thousands of comics and graphic novels in my life, including some of the all-time classics, and there are several which rank as some of the very best works of fiction I've ever laid my hands on. This one, though, towers above the rest to a staggering degree. Part of its genius is the way the book is laid out - interspersed with the main story, we get the wonderful Tales of the Black Freighter back-up, which tells a story being read by one of the comic's characters. This shows a man stranded on a desert island desperately trying to return to his hometown to save it from pirates, and is in itself an outstanding piece of work. As well as the two narratives, we get prose pieces to supplement our understanding of Watchmen's universe. Ranging from former hero Hollis Brown's autobiography extracts to newspaper articles and letters, they perfectly play their part in telling us about the setting. As good as the writing is, Dave Gibbons produces breathtaking illustrations which play just as much of a part in making this such a phenomenal book.

Watchmen is also a great starting point for people who don't usually read comics. With a set of new characters, the backstory is all explained for you, so a newcomer to comics won't get the same daunting feeling they might from seeing the mountain of books available featuring heroes like the X-Men, superman or Batman. And oh, what characters they are! Rorschach is an incredible antihero, Doctor Manhattan - the only one to be truly superpowered - incredibly sympathetic despite his awe-inspiring abilities, and the rest fit into the story perfectly.

I've intentionally kept my plot summary, and my thoughts on the characters, to the bare bones, by the way. The story, if you don't already know it, deserves to be discovered for itself as much as possible. Highest possible recommendation, truly incredible.
- March 19, 2012