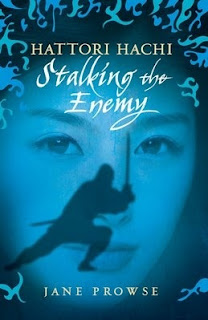 Warning - spoilers for book 1 in the Hattori Hachi series, The Revenge of Praying Mantis, will be found in this review.

If you haven't read book one, DON'T READ THIS REVIEW!

Hattori 'Hattie' Hachi would love the chance to be settle back into normal life now her mum has been freed. But she's always wary of the possibility of an attack by members of the Kataki, knowing she needs to get through to her sixteenth birthday and sign the scroll that will confirm her status as the Golden Child. If her twin brother Toby was to sign the scroll instead and become the Child, who knows what would happen? One thing's for sure - there'll be twists and turns before the big day is reached!

Having really enjoyed the first in the Hattori Hachi series, I was looking forward to this and it certainly didn't disappoint me. The friendship between Hattie, Mad Dog, and Neena is fabulous, and the developing romance between Hattie and Mad Dog is really sweet and nicely understated, never taking over the novel but always there in the background. In addition, the rest of the supporting cast - Hattie's parents, her mentor Yazuki, and long-lost twin Toby, who helped save the day in book one but may still not be trustworthy, are all really good.

It's also an incredibly fast-paced book. It's a relatively short read at a little over 200 pages, but it there's so much action in it that another author would probably have spun it out to 500 or so. As much as I like the occasional epic, it's great to have an exciting action story that can be read in just one or two sittings. As well as that, the concept feels really fresh and despite having a girl as a central character it's definitely not a 'girly' book - boys will be just as hooked by this one! In true ninjutsu style, though, Hattie uses her skills responsibly and is a great role model.

This is becoming a really enjoyable series and I'm looking forward to seeing what happens to Hattie in book 3, Curse of the Diamond Daggers!

Speaking of which, it's being published by Unbound - see the bit below, taken from my review of book one, if you'd like to play a part in funding the book - and get some cool stuff!

"Interestingly, while the first two were released by Piccadilly Press, the third is being offered via Unbound - a relatively new company where books - and swag - can be preordered, with refunds given if a certain target isn't met. It's a site which is publishing Red Dwarf's Robert Llewellyn, Labyrinth author Kate Mosse, and Monty Python's Terry Jones, amongst others, so clearly has the potential to be a real success. Rather than just release the third book on its own, they're bringing out the entire trilogy as a deluxe hardback - prices for pledges are £10 for an e-book version, £20 for the 1st edition hardback with your name in the back, or £50 for a signed first edition hardback (both with e-books included free). If you've got some cash spare, you can also get some interesting stuff for a bit more expenditure - £500 to have my name used for a character is somewhat out of my price league, but might tempt some people looking for a unique present, especially as it comes with 2 hardbacks and 2 e-books. I have to admit, £60 for a signed hardback and the ninja club kit of a Hattie hoodie, rubber throwing stars and access to a secret page on the website is probably tempting me rather more than it should for someone of my age...

If you're interested in playing a part in funding the trilogy, check out the trilogy's page on Unbound. If not, just enjoy this as a fun and thoughtful action novel."
- March 26, 2012