Monday Musings: Book Review of The Revenge of Praying Mantis by Jane Prowse 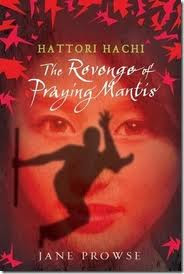 When Hattori Hachi's mother disappears, she's plunged into a whole new life. Because Hattori is the Golden Child, and suddenly the strange training rituals her mother always insisted on her taking part in without telling her dad are starting to make rather more sense... Aided by her friends Mad Dog and Neena and the laundry lady from downstairs, can Hattie overcome the feared ninja warrior Praying Mantis to rescue her mother? She'll have to watch her back - because enemies can be found where you least expect them!

I think there are a few other YA books out there about ninjas, but this is the first I've read and I really enjoyed it. Prowse's explanation of ninjutsu is clear and her crisp prose makes the action scenes really exciting, but the real strength here is the characterisation, particularly of the supporting cast. Mad Dog, a troubled boy from the Foundry care home which Hattie's mother had been involved with, and Neena, who's not really cut out for the ninja stuff but does her best to be a loyal helper anyway, are particularly well-drawn, while Hattie herself is a likeable heroine.

It's also a book with a really strong message about standing up for yourself but only fighting when it's absolutely necessary, and about the nature of friendship and trying to get along with people you don't necessarily immediately warm to. It's thought-provoking and a far cry from the mindless action of some similar books. Similarly, Hattie's journey through the dans of ninjutsu is very believable, being slow enough to convey the amount of effort she's needing to put into it - rather than the instant success you occasionally find to move the plot along in some books like this - yet never boring. It also helps that Mad Dog's progress is in marked contrast to hers and this shows how difficult it is to achieve her goal. Oh, one last strong point - I love Camden Town, and found it a brilliant location for Hattie's adventures, with Prowse describing it really well.

The book ends on something of a cliffhanger and I look forward to reading more about Hattie - thankfully I already have book 2, Stalking The Enemy, while book 3 is set to be released later this year. Interestingly, while the first two were released by Piccadilly Press, the third is being offered via Unbound - a relatively new company where books - and swag - can be preordered, with refunds given if a certain target isn't met. It's a site which is publishing Red Dwarf's Robert Llewellyn, Labyrinth author Kate Mosse, and Monty Python's Terry Jones, amongst others, so clearly has the potential to be a real success. Rather than just release the third book on its own, they're bringing out the entire trilogy as a deluxe hardback - prices for pledges are £10 for an e-book version, £20 for the 1st edition hardback with your name in the back, or £50 for a signed first edition hardback (both with e-books included free). If you've got some cash spare, you can also get some interesting stuff for a bit more expenditure - £500 to have my name used for a character is somewhat out of my price league, but might tempt some people looking for a unique present, especially as it comes with 2 hardbacks and 2 e-books. I have to admit, £60 for a signed hardback and the ninja club kit of a Hattie hoodie, rubber throwing stars and access to a secret page on the website is probably tempting me rather more than it should for someone of my age...

If you're interested in playing a part in funding the trilogy, check out the trilogy's page on Unbound. If not, just enjoy this as a fun and thoughtful action novel.
- March 12, 2012