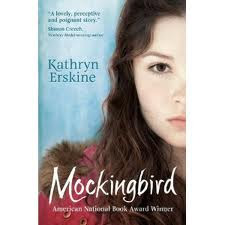 Mockingbird is the story of Caitlin, an 11-year old girl with Asperger's syndrome trying to recover from the death of her brother Devon in a school shooting. With her dad struggling to cope and Caitlin no longer having her brother to explain to her things she doesn't understand, the young narrator must seek closure on the tragedy herself.

I struggled to get into this one - Caitlin's narrative voice takes some getting used to. However, once I managed to get past that, I found this to be a well-written, thoughtful, and moving look at tragedy and at Asperger's syndrome. Watching the way Caitlin interacted with those around her, especially a young boy called Michael who she grew close to, the school bully Josh, who's the cousin of one of the boys who'd perpetrated the shooting, and her counsellor Mrs Brook. I also thought the way the other children - and even certain teachers - found Caitlin hard to deal with to be very realistic. There are also lots of parallels drawn with the fabulous To Kill A Mockingbird, with Caitlin taking after Scout and Devon taking after Jem - I really liked these, as a massive fan of Harper Lee's classic novel. The novel this is being compared to most is The Curious Incident of the Dog in the Night-Time, but while that left me completely cold (I appreciate I'm in the minority there!), this was far more engaging, and from my limited experience of Asperger's, I felt Caitlin was a much more realistic character than Mark Haddon's Christopher.

There's a couple of things which stop this from being one of my very top reads so far this year, despite the buzz it has going around it. I thought the ending was a tad rushed, if anything - it's perhaps one of the very few recent books I'd say might benefit from being longer! This is partly because it’s covering so much ground. As a novel about grieving for a dead brother, coping with Asperger’s, and a community in mourning after a tragedy, it does everything well but I think an extra few chapters might have given it the space to do it all brilliantly. I also found Caitlin's character development to be a little faster than I would have expected in one particular area. (If that sentence makes little or no sense, blame it on my avowed dislike of spoilers!) Oh, and a minor grumble - Caitlin is 11. There's no way on earth the girl on the cover looks 11, I'd have guessed early teens. Not something that's likely to bother anyone, I just had to mention it.