Thursday Thoughts: Book Review of A Witch In Winter by Ruth Warburton 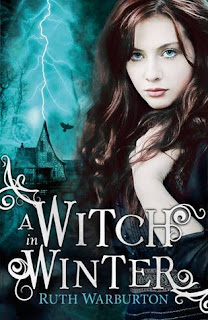 Anna Winterson is a London girl through and through, so she's less than thrilled to be moving to the small fishing town of Winter. When she gets there, though, she starts to meet people, and invites some of her new friends to a sleepover in her spooky house. Finding an ancient book there, they laugh and joke as they cast a love spell for fun - but Anna has hitherto unknown powers, and her spell works all too well, causing Seth, the school's resident hunk, to fall in love with her and dump his girlfriend for her. Anna's now left fighting the hatred of the cool crowd at school, her guilt over accidentally messing with Seth's mind, and her feelings for Seth which she's trying not to give in to. As if that wasn't bad enough, her use of magic has caught the eye of some seriously powerful witches...

Wow - that's one of my longest plot summaries for a while and it doesn't come anywhere near close to giving away much of what's happening in this enchanting book. Full of hot romance, great action, and fabulous British dialogue, this is a stunning debut. While Anna is a fabulous narrator and Seth's an excellent love interest, the undoubted star of the book for me was the location of Winter itself, the kind of place where people whose parents had moved there 50 years ago would still be described as offcomers. It was perfectly described, and the scenes which saw harsh weather hit the coastal town felt thrillingly realistic and incredibly atmospheric. Throw in a good supporting cast - my favourite being Seth's grandfather, an old fisherman bemoaning the death of his industry - with a really nasty bunch of villains, and some absolutely outstanding action sequences, and this has got me desperately waiting for the next book in this trilogy.

One more thing - while I rarely comment on covers, I have to say that this one is simply spellbinding, and fits the story perfectly, capturing both Anna and the book's general atmosphere wonderfully well.

Strong recommendation, particularly to fans of magic and romance.
- February 09, 2012