Thursday Thoughts: Book Review of I Love You Beth Cooper by Larry Doyle 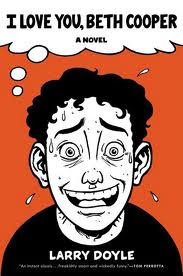 Valedictorian Denis Cooverman is determined to make his graduation speech one to remember. What better way to do it than by proclaiming his love for head cheerleader Beth Cooper? There's only two problems - one, Beth barely knows Denis exists, and two, her boyfriend Kevin is home from the army and doesn't appreciate a nerd making a move on his girl. When Kevin and Beth have a row and Beth turns up with two friends at a party hastily arranged by Denis and his best friend Rich, events are set in motion which lead to the most - and maybe only - memorable night of Denis's high school life.

I read a review saying that "I Love You, Beth Cooper" was a perfect holiday read, but I think I misinterpreted it slightly. While it's easy to imagine lying down on a beach enjoying this fun romp, the main reason for reading it 300 miles or more away from home is that there's much less chance of anyone you know seeing you collapse in fits of laughter - a real danger on a host of occasions in this book. In many ways, it's rather derivative - it resembles countless 80's movies, and wears its influences fairly clearly on its sleeve, especially when it comes to Denis's film-quoting best friend Rich. That said, who cares about the originality in a book this funny? There are countless laugh out loud moments, some really great characters, and a few moments towards the end which reveal a bit more depth to it than you'd see at first glance.

Warning, though - it's on the crude side of YA literature. Nothing horrendous, but definitely more sexual content than most books in the genre. Second warning; at one point a girl tells another character to Google a particular term. Don't follow her advice yourself.