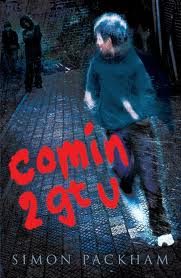 Sam Tennant is reasonably happy at school, generally gets on alright with people, and doesn't have much to worry about – until he's murdered in the first chapter of this novel. Oh, not really murdered – his character in a game he plays online is killed. But then, the two who kill him refer to him by his real name instead of his computer persona, and he realises that virtual life has just become very nasty indeed.

What follows is a gripping, horrible, and yet totally believable description of an online and offline bullying campaign carried out against Sam by other Year 8 pupils as he tries desperately to identify the mysterious 'Emperor', who sets up a hate site against him and leads the nastiness. Desperately trying to stay strong in the face of their malice, he's left with just two friends, shy Abby and nerdy Stephen, as his dad is away from home, his mother's tied up with a difficult work case, and his dying grandfather has dark secrets of his own which he needs to share with Sam.

As someone with many friends who live hundreds, in some cases thousands, of miles away from me, I absolutely love the internet because it makes it so easy to keep in touch with people I'd otherwise have drifted apart from. As a secondary school teacher, I find the internet increasingly scary as I've seen the amount of our pupils who experience difficulties when they fall out with their peers and things are written on the internet, especially on social networking sites. I don't think it's necessarily easy for those people who grew up, as I did, before the internet was particularly popular, to realise the impact it can have on children's lives these days and from that point of view, I'd definitely recommend this to all parents and teachers as an example of just what can go wrong. It could also lead to some superb discussions in school as part of lessons.

Of course, while that's all very worthy, it wouldn't really matter if the book was boring to read – thankfully nothing could be further from the truth, as it will definitely hold the attention of young and old alike. I love the journal of his wartime memories that Sam's grandfather gives him to read, and thought the two storylines were tied together neatly in the end – although I have to confess, the ending seemed to be a bit too hasty in many ways, with one character's final actions seeming rather bizarre. Still, a minor drawback in what's otherwise a great read.
- February 04, 2012